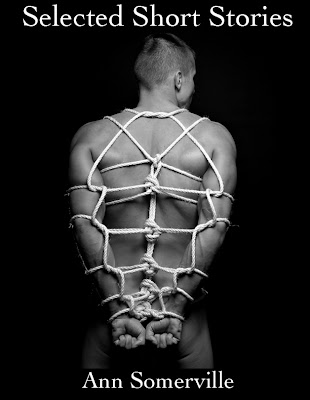 Overall
As a collection of short stories, this was a nice mix. It allows new readers to get a varied taste of what Somerville is capable of, and for free to boot! I read these out of order (skipping the first two then going back to read them, merely because of time constraints at the time). Two of the stories are merely a snapshop of a scene or a element of a man's life and are enjoyable but leave more questions asked than answered, which isn't a bad thing considering what they're made to do. Three of the stories are a medium length with enough time to develop a small plot and a few characters and evoke some powerful emotions. There is one long story, which is the first of the bunch. I break down my thoughts on them below. PS. A simple and yet lovely cover.

Time Out
If I were ranking this story alone, it probably would have earned 3 stars. While I enjoyed Sean's perspective and Somerville's writing, there were a few things that didn't speak to me. One, while a fan of BDSM, there was one extended scene (the last one) that I had to quickly skim over because it's just not to my taste (that is no fault of the author). Afterward, Somerville amends any squiggled hearts (that'd be mine) and it's okay. The events fit with the characters and what the characters want/need, but it's a personal thing. Also, the narrator constantly uses more official/medical terms, which could be because he's a nurse, but I still blinked every time. (Odd how when you spend time in a genre it's the proper name for things that make you blink.)

Things I liked about this story include the writing, the characters (Tom and Sean are lovely!), and the little things that let the reader see how much they care without having to say it aloud. Sean's insecurities that are just under the surface but don't bubble up too often, Tom's protectiveness that never becomes overwhelming, their date out on the town and their first two scenes, one of which involves creative use of ginger. (You'll have to read to find out ;))

I was curious about the time period of the stories. I know they take place after 2001, but they feel like they belong in a more conservative realm. Of course, I'm not as familiar with London/England as I am with U.S. perspective on everything, so I'll plead ignorance (sorry). I suppose I assume that European countries are more advanced than us...

Tom and Sean
This story throws us into a time with Tom just before he meets Sean, when he is rather lonely, out of a bad relationship, and too busy working for a relationship. He accidentally meets Sean, who is nothing what he expects and he's perfectly happy with it. It was nice, after seeing how their relationship has progressed and how stable they are, how everything got started. One hot sex scene that indulges both their needs and hints at what more is to come.

Autumn Rains
A very short story focused around a rainy picture and an umbrella, the story mainly deals with the narrators frustrations over an umbrella he lost and the man he lost with it. The end left me wiggling and wanting more (in a good way), although I imagine nothing more will be coming of this. The narrator was fun and a little flamboyant, adding some light to a rather sad story...although there is always potential for a happy ending, isn't there?

Fire, Fire
Probably the oddest of the bunch, this one switches perspectives every so often as it follows a group of people who approach a man standing at a fire barrel. Although we learn little to nothing of the man, we see a varied bunch of people who he meets. A good study of humanity.

Going Away
While this one toes the line of the classic dead-boyfriend trope, it was handled well and short, and sweet, enough that we aren't bored.

The Gift of Giving
This is my favorite, which may just show that I'm a sap for sweet Christmas stories. Regardless of my sap situation...we are introduced to our not-Scrooge narrator, who is alone for Christmas, like he is every year. A chance meeting at a museum leaves him curious about a handsome and artistic man whom he follows to a soup kitchen. While this story could come across as heavy handed, I never found it that way. The characters have clear motivations and are lovely and tender and hopefully willing to grow into their feelings for each other. I can imagine them having many happy Christmases in the future (you know, not to spoil you, but it is a Christmas story).
Posted by Unknown at 20:55