To Adam With Love by Adrienne Wilder 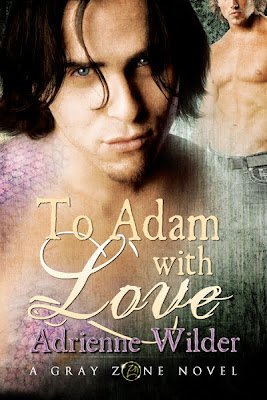 To Adam With Love by Adrienne Wilder
Stars: 4.5/5

Length: 230 pages
Blurb
Adam's mother brought him as a child to the Gray Zone, the no man's land between the crumbling city and the Dens where the Kin-the Dragons-and Lesser-Breds-their mixed-blood-offspring-live. He was different, not completely Human, and she knew fear and prejudice would drive people to do horrible things... like a father trying to kill his son. Five years later, Adam's father is behind bars and Adam has come home to the Zone, the last place anyone would expect innocence, loyalty, and devotion, to complete his becoming Lesser-Bred and find his best friend and only love, Ean.

But Ean has a life of his own. He's always wanted to belong to Batu, the Male Kin who has watched over him since childhood, but now Ean's caught in a deadly trap of biology and vengeance: he isn't enough to feed his beloved Adam during the dangerous transformation, and Kin won't allow an emotional bond in their midst. Years ago Ean lost Adam after failing to keep him safe. Now that Adam is back, will a simple feeling give Ean the strength to defy everything he's ever known and keep them together?

Overall
I put this book off again and again because going in I knew it was going to be a darker novel and I kept telling myself I wasn't in the mood. However, while it is a darker novel, it's not bleak. It takes the reader along a twisted path full of thorns and prickers, but it doesn't rip out the heart, stomp on it, then stitch it back in. Instead the central themes are love and emotions, as Adam is afraid of losing his humanity, and Ean is slowly trying to understand his own humanity beyond physicality.

Parts of this story dragged for me, but only because I wanted to know the ending and how the author worked out all the different problems that the characters were facing, which speaks highly of the plot that Wilder created. I would recommend this to most, but for readers of fantasy and dystopian futures, this should definitely be something to check out.

Strengths
While he's not mentioned in the blurb, there is actually a love triangle involved in the story. Ean and Adam love one another, but there is a young man named Brian from their past who also loves Adam, and Adam feels attraction in return. The play of these three characters was amazingly supple, to the point where I thought I knew how things would end up, but little moments would leave me guessing how exactly the lovers would pair off.

Speaking of the end--without spoiling everything, since spoilers would damage the enjoyment of this book, I feel―I really liked how everything unfolded and was resolved. I had one minor niggle involving Adam's father, but overall I was surprised, pleasantly, with what happened. I definitely wasn't expecting things to go that way, but it also didn't blindside me.

Wilder creates a very interesting and thought out world here, and I look forward to reading more of it in the second novel Worth. Although there wasn't much explanation for why there was a nest of these dragons who masquerade as humans, and it's never mentioned if there are other nests, I enjoyed the ample information that was given. The world, word usage, and culture surrounding the Kin was detailed without bogging down the story and felt organic within the plot.

Weaknesses
Most (if not every) chapter started with a flashback from when Adam and Ean were kids. While this was vital for supplying history about the characters and building up their relationship, especially in the beginning, it also became a little tedious toward the end when events were quickly unfurling and I wanted the story and I wanted it immediately. In someways it interfered with the natural flow and I felt it could have been used more judiciously, but it in no way ruined the book.

There is a glossary in the beginning that goes over many of the terms that are used pretty consistently through the book. While this works in paperback from, in ebook form it becomes pretty much inaccessible. For the most part the reader can use a single reading of the glossary and context of sentences to know what is happening, and by the end the words are second nature. However, I found two words (chela, which means claws, and chetra, which means humans) to be near enough in spelling that the first instance of chetra had me confusing it with chela. A minor inconvenience that was easily fixed by context clues, but for readers who have difficulty with learning new vocabulary, be advised.

Requested this book for review.
Posted by Unknown at 17:56