Counterpoint (Song of the Fallen, #1) by Rachel Haimowitz 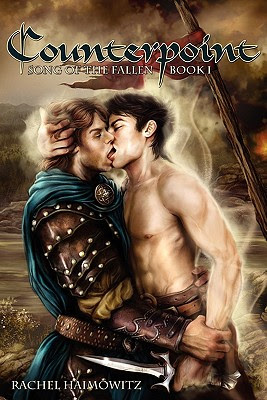 Counterpoint (Song of the Fallen, #1) by Rachel Haimowitz
Stars: 5/5

Length: 120,700 words (414 pages)
Blurb
It is the twilight of mankind. Depleted by generations of war with a dark race, the human kingdoms and their ancient alliance stand on the brink of extinction. The outlands are soaked with the blood of the fallen. The midlands are rotting with decadence and despair.

Elfkind, estranged by past crimes, watches and waits for nature to run its course.

And then the two collide.

Ayden's life has long been guided by two emotions: love for his sister, and hatred of all things human. When he's captured in battle, he must for his sister's sake swallow his pride and endure slavery in the service of a human prince, Freyrik Farr.

Freyrik's always known elves to be beautiful and dangerous, but never has one affected him as deeply as Ayden. Can his life of service to his people leave room for this attraction? Dancing on a dagger's edge between duty and high treason, Freyrik discovers that some choices can change a life, and some an entire world.

Between prejudice, politics, pride, and survival, Ayden and Freyrik must carve a new path, no matter how daunting. For nothing less than the fate of both their peoples rests on the power of their perseverance—and their love.

Overall
The first of two books telling Ayden and Freyrik's story, I'd recommend readers diving in to the story be prepared to have Crescendo on hand after finishing Counterpoint. The novel is lengthy, a slow build from enemies to lovers, but the emotions on both end are eloquently executed as the pair learns to trust and care for one another while navigating the landmines their races' history has thrown in the way.

While this story is definitely a romance, it is just as equally an epic fantasy, where mankind is battling against supernatural monsters in order to survive and elves wield nature's magic. The fight for survival and victory is just as central to the story as the battle for their relationship. This is an amazing adventure of the heart and the mind that drives the reader to the cusp, clinging on by the tips of the fingers.

Strengths
Although I'd love to list every positive attribute of this novel, I'll refrain and only pick those points that jumped out at me. However, this book really encompasses the definition of epic fantasy romance and is epic-ly fantastic (see what I did there?).

The first thing I noticed when I started reading was the strength and natural flow of the writing, followed by the incredible world development. Although Haimowitz's world takes from some general mythos (elves have magical powers, humans are bitchy angry), she also makes this world her own, building up unique enemies and social mores. The world is painted beautifully--in the case of the elves--and darkly--in the case of the human world--bringing to life the characters that inhabit it.

Ayden and Freyrik are interesting, unique characters who clash wonderfully and meld together just as hotly. But they aren't the only characters who bring life to this story. Along with various bullies (the lead of which is the First Wife), Freyrik's right-hand man (Lord Lini) is a shining example of a good friend. I think because he has so little to gain by being so loyal, his loyalty is all the more precious. The various characters add a level of depth, and although the cast is expansive, the flow of actors is expertly handled to avoid confusion and clutter.

Finally, the plot. Oh the plot. A mix of master trying to win a slave's heart, two warriors clashing, a fight for survival of the human race, and a ribbon of political intrigue that taints it all. There is so much in this story to feast on that you will finish it sated--and hungry for more. Thankfully, the next book promises to be just as hearty. While this plot isn't fast faced, it's detailed and thorough, leaving the reader guessing while vibrating with anxiety to see what becomes of the heroes.

Weaknesses
Not a weakness, but something to be warned going in: This is part one of two parts. Just like Lord of the Rings, the book ends without complete resolution of important matters that are to be resolved in the second book.

Another word of warning, while this isn't a slow or sedate novel, it does take time to build in order for everything to fall into place. It is not a short little romance, but that is also what makes it so amazing. There is a fair amount of politics involved, and I imagine there will be more in the second novel, but it's balanced by the character development and danger--from external and internal factors.

Note: I linked to the Riptide Publishing version above, but I read the first printing from Guiltless Pleasure Publishing.
Posted by Unknown at 19:37