Blacker than Black by Rhi Etzweiler 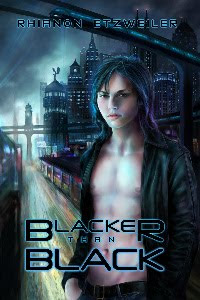 Length: 110,000
Blurb
Apparently, my twin and I are two of York’s most notorious criminals. We’ve been Nightwalkers in the blue-light district since the vamps took over the world. Don’t know how many years it’s been. Long enough that a stream of fellow ’walkers have come and gone. Most don’t last long selling their chi. End up face-down in the gutter, or worse.

For us, one night and one sale change everything.

Monsieur Garthelle is the first john to hunt me down. He calls me a chi thief in one breath and offers absolution—servitude—in the next. Maybe I’m a sucker, but I like living and breathing. Strange that such a powerful vamp would show leniency to a mere human. And something’s not right with the chi I took from him. It won’t go away.

Neither will he, and he’s forcing us to spy on his peers. Then a vamp turns up dead, and we go from playing eyes and ears to investigating a murder. This isn’t what I signed up for. All I ever wanted was to sell a little chi, maybe steal some in return. I should’ve kept my damn hands to myself.

This is my story. Look through my eyes.

Overall
An incredible journey that takes the reader from the rough streets to shadowy, backstabbing high-class mansions. It's a winding tale that plays at a murder mystery, delves into social issues, paints a glorious urban fantasy world, and rounds it out with a tense bit of romance. This is not a typical read, and it's hard to shove it under any one genre heading, but it's definitely something to pick up (especially if you want something new).

Strengths
It's difficult for me to pinpoint all the strengths of this novel. The pieces weave together so tightly, it's hard to pick just one or two threads. However, that being said, I can mention the elements that caught my eye as important parts for the enjoyment of this novel.

One is the evolution of events, story, and romance. The story starts off almost exceptionally simple with a 'whore' picking up the wrong 'john.' But as the characters interact, the story unfolds, expands, and almost explodes off the page. While the events, story, and romance are fine, it is experiencing the development of everything that makes the novel impressive. It's a feat to keep the readers attention for so long in first person while developing multiple tendrils of story, but Blacker Than Black does it. As I muddle through trying to explain, all I can really say is it's something that is best experienced first hand.

Two, this book has a cast of colorful characters. They aren't all good, in fact, most have some sort of underhanded moment, even if it is against the "bad guy." Honesty would have gone a long way to avoiding many of the circumstances, but then we wouldn't have had much of a book! I loved Garthelle, the shady bastard, and Black, possibly the least trusting individual in the book (with good cause, sometimes). There were various side characters who added layers of entertainment, one of my favorite being the butler, who is a loyal, sometimes snarky, worker willing to think for himself. What I really enjoyed (even when it made me want to rip out my hair) is that while I thought I knew where things were going and who to trust, I never did. Much like the main characters, I was constantly on uneven footing.

While this world is similar to ours, the flourishes that Etzweiler added, from the social mores and the creation of chi prostitutes to the hierarchal social structure of the vampires--I mean lyche. Everything may take place in a future of our world, but in reality it takes place in the lyche society and follows a different set of rules. Everything was well handled--and if you're confused it's probably because you're meant to be.

Weaknesses
Some readers may find some of the language choices to be distracting, but they were consistently used, so I chalked it up to narrator's voice, although it did chafe me a little. Though the fact that this is my biggest issue with the story, says something about it's quality.

The author raises some questions in the second half of the book that don't get answered, but honestly they didn't need to be answered for the conclusion, nor could an answer easily be achieved. Some may find the hanging questions to be frustrating, but I found them interesting, as the reader and the narrator must look at "Why does it matter?"--a question that can be applied to several elements of the story.

While this is a longer story, it has a good pace and brings information in from all angles, so it never came across as boring, although some parts are slower.

I am affiliated with Riptide Publishing. Read as a proof.
Posted by Unknown at 15:34