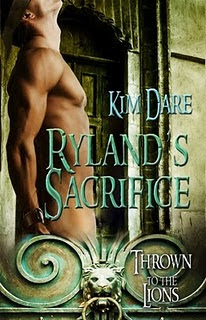 Overall
While I enjoyed the ride, I wasn't really won over by it. Elements of it were good and nothing was particularly bad, but it didn't spark an interest, either.

Strengths
Repaying the debt. Very amusing and funny, I like where Dare took this.

Characters. Although the main characters were fine, I was more interested in some of the side characters, specifically three of the lions who, since they have their own books, I am tempted to read more about. As for the main characters, they were both acceptably human and realistic, and although I connected to them, I wasn't really too emotionally involved.

Weaknesses
I found the conflicts hard to buy and didn't feel incredibly invested in the characters or their plight. Although I wanted them to get together, I didn't feel a sense of struggle in them doing so, although I did want them together and was frustrated (like they were) with their situation.

The shifter's place in society seemed a little odd, because people seemed to know about shifters (enough that some would be willing to be 'thrown to the lions') but outside of the den scenes, we don't get any mention of shifters. I wanted to know more about the society, especially since culture played an important role with these two characters.
Posted by Unknown at 18:19