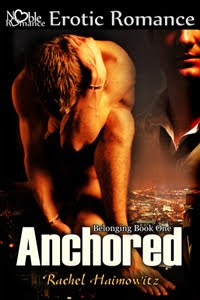 Blurb
Network news anchor Daniel Halstrom is at the top of his field, but being at the bottom of the social ladder—being a slave—makes that hard to enjoy. Especially when NewWorld Media, the company who's owned him since childhood, decides to lease him on evenings and weekends to boost their flagging profits.

Daniel's not stupid; he knows there's only one reason a man would pay so much for what little free time he has, and it's got nothing to do with his knowledge of current events. But he's never been made to serve like that before, and he fears he won't survive the experience with his sanity intact.

He finds himself in the home of Carl Whitman, a talk show host whose words fail him time and again when it comes to ordering Daniel to bed. Daniel knows what Carl wants, but it seems as if Carl isn't willing to take it, and Daniel's not willing to give it freely. His recalcitrance costs him dearly, but with patience and some hard-won understanding, love just might flourish where once there'd been only fear and pain. Can Carl become the anchor in Daniel's turbulent life, or will he end up the weight that sinks his slave for good?

Overall
Although this is shelved with romance novels, if you go into this expecting a romance, you'll probably run screaming. The amount of romance present is minimal and, for the most part, one sided. There is also a (tastefully done) on camera rape scene, a non-sexual flogging, and 80% of the book is Daniel bouncing between terror and panic.

Maybe it says something about me, but I loved it.

While this book by no means gave me warm fuzzies, except for maybe on the last few pages, it was a powerful, moving story of humanity and freedom and the fight to keep a sliver of self. For the majority of the story (80%), I ached for Daniel's situation, never quite crying but definitely hurting for him. The horrors that happen to him are shocking and painful, and some people understandably won't be able to take them. The emotions are raw like the top layers of skin have been peeled back to expose you to the air, stinging and burning, and if everything wasn't written so well and handled so carefully, this story could have fallen down in a pile of creepy, disturbed author. Instead it's wonderful in a horrible, horrible way.

Strengths
Writing. Highly enjoyable, Haimowitz handled some heavy duty, very sensitive subjects well. She paints a very clear picture of what's happening and the world, although we only see glimpses of it.

Characters. Carl. Of all the characters, I find Carl the most interesting because he is so very human. Jane is sweet and tender, sometimes giving Daniel tough love, but still there to support him and help him through rough spots. Mr. F is the villain who you want to lock away in a tiny cell and pretend that sort of inhumanity doesn't exist (even though it does in every world), and Carl is human. He is kind of in love, trying to do the best he can, but he has certain expectations and becomes frustrated when they aren't met. He's not a saint and he's not vicious. He's a good man, but he's not a perfect man and while some events in the novel are his fault, it's his blindness to some elements of reality that leads him to make those mistakes, even when he was just trying to do what was best for Daniel. Overall the characters were great, each in their own way, and colored brightly, and sometimes horribly.

Emotion. I don't think I need to reiterate how much emotion this book evoked from me, but I will. I found it to be extremely powerful and moving in that way that fiction portrays the horrors of reality.

Weaknesses
Carl's ignorance. I was surprised at Carl's lack of understanding about Daniel's situation, but I can also defend it to myself as well. He doesn't understand Daniel's fear, but he's a worldly man who would/should know how some slaves are treated. However, giving him the benefit of the doubt, he's only seen Daniel as a happy, smart slave on television and probably figures Daniel has a good life. Also, he is human (with a bit of a temper), and was expecting a happy, at least somewhat willing bed partner (with some Companion training) and instead got a quivering, terrified man. While his reactions are necessarily always forgivable, they are understandable. Also, his ignorance ends after the Big Event, which I think really opens his eyes. So maybe not a weakness overall, but initially it seemed that way.

SPOILER ALERT
*
*
*
*
The ending/characterization. Maybe this will appear in a sequel, but I wish the end had built Daniel and Carl's coping outside the bedroom a little more. Carl (and some reviewers I've seen) make the point that we never see Daniel being suave, witty and functional. I can believe that he is that (because of his airtime), but we know that Daniel is a basket case around Carl because he's terrified, and I would have liked to have seen a scene or two of Daniel being who everyone says he is, possibly with Carl after the big event. I'm perfectly happy with the ending, at least for where Daniel is now, but I think seeing competent Daniel would have been nice too.
Posted by Unknown at 21:30

I find myself agreeing just about exactly with this review! The strengths are right on target, and I saw the same weakness: I really want a scene, outside the bedroom, that shows Daniel at ease with Carl and talking intelligently about subjects they both care about.

I'm looking forward to the sequel, where I hope we get to see more of Carl and Daniel as a settled couple. Maybe Daniel's 'TV persona' will be more evident in that book.

Thanks everyone. Glad I'm not alone in my reading of it! :)