Snowball in Hell by Josh Lanyon 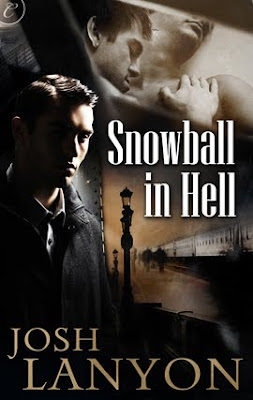 Overall
A classic detective/murder mystery with a gay romance twist, this World War II story starts with a rainy day in December and pulls you through the dreary streets of Los Angeles and the surrounding area. In a world where everyone has secrets, Nathan Doyle has a secret that could ruin his life if it gets out. In order to keep it quiet, he and Lieutenant Matt Spain race one another to solve the mystery first. While the mystery ties the story together, this is a study of two men in a difficult time period, one of whom is struggling with himself while desperate for human contact. The strength of the book is in the writing as the reader sinks into the characters and doesn't want to leave even as he reads the last lines.

I'm excited to learn that Lanyon plans to continue this as a series with a second book due in 2012.

Strengths
Writing. Lanyon's writing is excellent and very smooth, giving the impression of the time period without confusing the reader. There is something very clean about the writing, leaving the story to shine through. Highly enjoyable and a pleasure to read.

Characters. Matt and Nathan are both good guys who want the right thing, and also both happen to want something for which society can throw them in prison. It's hard not to like them, especially when they're surrounded by a bunch of shady characters that they interview while trying to solve the case. It doesn't hurt that the pair has a good dynamic in their actions and dialogue.

Atmosphere. Aside from the major conflict of the time period (aka, sexuality), I liked how Lanyon integrated minor points about things relating to it being during World War II and the small hardships this caused, such as foods and drinks not being available and older people who would have been retired needing to work since able-bodied men were at war.

Plot. The story was intriguing without being too suspenseful (which could count against it for some people, I suppose). There is a sense of danger, but not so much that the reader is constantly fearful for the main characters' lives. I enjoyed the resolution, though it could be construed as cliche, I think that's what I enjoyed most about it!

Weaknesses
A very minor detail, but in the beginning the PoV switches only seemed to happen between chapters, but as the novel progressed they seemed to happen more often and without regard to chapter ends. Also, and this probably just the formatting of my copy, but there were times when jumps in time or perspective occurred and there was no space in the text to indicate it.
Posted by Unknown at 07:14