The Only Gold by Tamara Allen 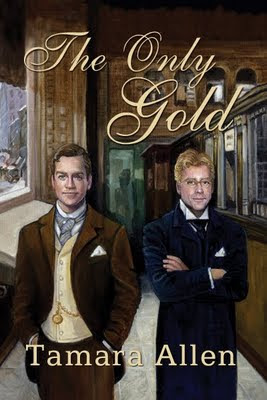 Overall
This is a highly enjoyable book, especially for fans of Allen's previous works. Halfway through reading I described the experience as taking a leisurely stroll through the park, and until about three-quarters of the way, it is very much like that. If you're looking for action-packed adventure, this isn't the book to pick up, although the last quarter does a good job of satisfying that. This is like many romances where our two unlikely men meet and fall in together. It is unlike most romances in that a large amount of time is spent developing the one character before the two get together.

Much like Allen's other works, this is a novel where a romance happens and is essential to the story, but a steamy romance should not be the sole reason you're reading (in my opinion). You should read it for the pure enjoyment of going along on whatever path Allen takes you through the park, being sure to study the flowers along the way. This was another wonderful piece and definitely worth waiting for.

Strengths
I don't think I can praise Allen's writing enough to express how much I enjoy it. Much like the time periods she writes in, everything is slowed down, nothing is rushed when it doesn't have to be. Characters and relationships are thoroughly explored, environments are completely fleshed out, and all the reader needs to do is go along for the ride (through the park, to keep with my metaphor). Even when very little is happening plot-wise, the story never stumbles because the writing is that enjoyable. (Warning: That's for me, at least. I can imagine some people may have trouble with the same things I find enjoyable.)

Depth of character. As a character-junkie, I adore how much we learn about Reid and Jonah. I love the indistinct lines between good guys and bad guys. And, I'll be honest, I want to squish Jonah in a giant bear hug (but I'll leave that to Reid). I enjoy the variety of characters we see both at the bank and at Jonah's boarding house, my favorite of which has to be Liliane and Margaret.

Plot/story. While the heavy action doesn't pick up until later in the book, the extended character growth and relationship development were plenty enjoyable and culminated in a more pleasing climax (*cough*). When the action does happen, the reader is so committed to the characters that the story becomes rather suspenseful and Allen moves the pieces around the chess board splendidly.

Weaknesses
Not so much a weakness, but some people may find the story to be slow moving, especially if used to fast-paced, hot-and-heavy romances. This is not a bodice ripp---err, a button ripper. There are sex scenes, which is new for Allen's books, but they weren't very graphic, which may bug some people, but I felt it fitting since Jonah was narrating. Reid's PoV of the scenes would have been dirtier.

There were a few things that gave me pause in the novel, the main one that sticks out is some of the sums. Ten dollars to look out a window seemed expensive for the time, but maybe that was the point. Also, a few times the language felt a little stiff, and while most the times I attributed it to Jonah being a stiff personality, once and a great while it felt like Allen was trying too hard to keep with the era's language (or what we think it should sound like). On the other hand, this didn't really bother me; I just took notice, possibly because I've been accused of the same.

Warning, the below could be considered possible spoilers.
*
*
*
*
*
I do love the ending, but some may find that it is too tidily cleaned up and set into place (especially the Alice/Gil bit, which I didn't really go for). Also, I'm noticing a theme of being separated or the threat of separation being the final push to bring two men together. It was handled slightly differently here, but was close to how Whistling in the Dark ended. I feel so picky, but I get that way when I enjoy a book!
Posted by Unknown at 07:07