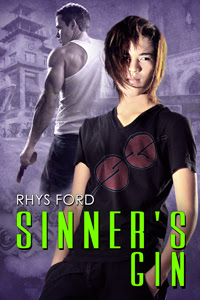 Length: 260 pages
Blurb
There’s a dead man in Miki St. John’s vintage Pontiac GTO, and he has no idea how it got there.

After Miki survives the tragic accident that killed his best friend and the other members of their band, Sinner’s Gin, all he wants is to hide from the world in the refurbished warehouse he bought before their last tour. But when the man who sexually abused him as a boy is killed and his remains are dumped in Miki’s car, Miki fears Death isn’t done with him yet.

Kane Morgan, the SFPD inspector renting space in the art co-op next door, initially suspects Miki had a hand in the man’s murder, but Kane soon realizes Miki is as much a victim as the man splattered inside the GTO. As the murderer’s body count rises, the attraction between Miki and Kane heats up. Neither man knows if they can make a relationship work, but despite Miki’s emotional damage, Kane is determined to teach him how to love and be loved — provided, of course, Kane can catch the killer before Miki becomes the murderer’s final victim.

Overall
A dramatic romance that toes the line of insta-love and sweeping rescue hero but has enough strong points to make all those elements work. The mystery is well done with some disturbing images but no heart-stopping suspense.

Review
I’ll freely admit that I have a giant soft spot for broken characters, so Miki pushes that button easily. He had a bad past and just when he was getting things together, life threw him a curveball. But then, it also threw him Detective Morgan, so it isn’t all bad. Kane is from a giant Irish family that is friendly and accepting (although a bit overwhelming). Even though he and Miki have a rough start, fate keeps tossing them together and makes it impossible for them to ignore the attraction they feel.

Kane plays the hero, sweeping in to protect and save Miki, while also healing him and teaching him to love. Analytically I could see how some readers would find this cliche or overdone, but I felt it was handled well and brought something to the relationship besides chemistry. Although I would definitely say that having a preference toward hurt/comfort helps.

While I found the police investigation to be a bit drawn out, I can see why it was done that way. Still, I think better pacing or balance between the police drama and the romance would have made for a quicker story. In addition, the amount of detail to settings and visuals threw me off sometimes, but I think it was more because I’m not used to reading stories with so much, so often, but that could just be me.

Miki’s emotional struggle is the driving purpose behind the book and what made it so easy for me to finish. I think anyone who doesn’t enjoy Miki will find this difficult to read, as he’s obviously a main character and his issues run deep. He develops and changes over the course of the story as he gets a support system, but for the majority he’s a prickly pear.

One sort of issue I had with the ending was the tagged on bit. It really threw me for a loop. It felt disconnected from the story at large although it was related to the events, and it had a very different feel from the main story. I can respect it’s potential necessity in order to introduce the idea before the next book (or else they would hardly feel connected at all) but it also made my brows go up and my nose wrinkle. If it weren't for this odd teaser at the end, the story would have concluded very satisfactorily. It still sort of does, but another can of worms is opened.
Posted by Unknown at 17:51