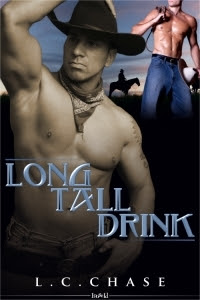 Length: 161 pages
Blurb
Fourth generation rancher, Ray Ford has lived a lie for nearly forty years. Having seen what can happen to an openly gay cowboy in small town America, and not willing to risk his ranch Ford Creek's legendary reputation, he keeps that part of himself tightly locked down. Everything changes one Sunday morning when Ray, out of character, picks up a handsome hitchhiker looking for work. Hiring the enigmatic cowboy stretches the bounds of Ray's control and, suddenly, he finds himself asking just what he'd be willing to risk for a chance at true love.

Travis Morgan learned a hard lesson early in his life -- love is conditional. Even though he's a world-class horse trainer in high demand, he lives the life of a drifter, moving from ranch to ranch like the wind. He'll play when the opportunity arises, but he won't invest himself emotionally. But when he takes on the job training horses at Ford Creek Ranch, the stoic rancher with the sexy five o'clock shadow just might change all that -- if Travis can take the risk and stick around long enough to find out.

Overall
A smoking cowboy story that was a little heavy on the sex and sexual tension for my tastes, but I imagine would be perfect for most readers. Overall, fairly standard, but enjoyable.

Review
The two points that made this story slightly less enjoyable for me, but may make it perfectly enjoyable for other readers, are its high sexual content and it's somewhat standard cowboy themes. I don't judge either poorly (the story makes no bones about what it is), but it did make it more humdrum for me while reading.

The sex is steamy, but most of the pages are filled with longing rather than doing, as the two men oogle one another and get a little grabby hands. The tension makes sense, given their situations, but if you want hard and fast, you’ll have to look elsewhere. The strain works for the story, although I found it understandably frustrating at times!

The underlying drama that Sam causes works well to move the story and create friction, while also exhibiting how tender the men can be to each other and others. Plus it works as precedent to show the reader how the ranch will react to one of their own being gay.

What I found most refreshing about this cowboy tale was the climax. It wasn't what I was expecting it to be, but it turned out to be just what the characters needed. Some may feel that it comes out of left field, but I thought it was fitting. It earned the story extra points in my mind.
Posted by Unknown at 09:20