Rhys Has a Crush by Melanie Tushmore 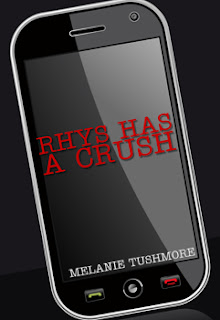 Rhys Has a Crush by Melanie Tushmore
Stars: 4/5

Length: 10,700 words (28 pages)
Blurb
Nineteen-year-old wannabe rockstar Rhys spends his days hanging out and drinking with his garage band in his friend's house. It's not like there's anything else to do in their boring home town.

Then Seb's older brother appears; a gorgeous vision in tight, black clothing, and long dark hair. Rhys is instantly attracted, though his attempts to flirt with the mysterious Damien don't go all that well. So Rhys resorts to a fail safe plan: steal Damien's phone number, and send him anonymous love-texts.

Overall
A short that turns from an annoyingly realistic rocker teen tale to a heart-warming snuggle.

Review
The beginning had me unimpressed with the main character, who came across as shallow and...well kind of like a self-centered teen should. And Rhys is that (both, actually), but as surly Damien is introduced, we also get to see the softer, unsure side of him...which is oddly likeable. As the story progresses, it gets cuter and cuter.

I think my only complaint would be that the characters that start the story don't feel like the ones who end it, and there wasn't enough time to really explore the change.

Still, overall this is an enjoyable freebie...especially if you like rockers.
Posted by Unknown at 20:41