Out of Focus by LA Witt 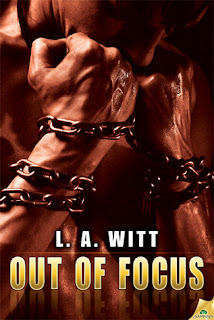 Length: 244 pages
Blurb
He’ll bend for them. But they may break over him.

For twelve years, Dom lovers Ryan “Angel” Morgan and Dante James have run a successful photography business, and satisfied their need for a submissive with the occasional sizzling three-way. On a wedding job, they both zero in on the bride’s beautiful brother, but as professionals, they keep their attraction on the down-low—for now.

Jordan Steele has no trouble establishing mastery over his stallions. When he hires Angel and Dante to shoot promotional photos for his stable, though, there’s something about them that calls to his inner submissive. After a little flirtation and a photo session that gets almost too hot to handle, Angel and Dante are happy to show him the ropes. And the whip.

Once they break the ice, their sexual chemistry burns hotter than a macro flash. Everyone gets what they need…until emotions come into play. Their power could develop into something permanent, throw everything off balance—leaving one of them the odd man out.

Strengths
The triad in this story was well handled, from the coming together (*cough*) to the difficulties they face when having three, especially when two are an established couple. The characters all think things through and come up with good solutions, making this a believable scenario.

Weaknesses
There was too much sex for me. Not mind-numbingly too much, but any time there was a scene that didn't involve all three, I tended to skim. This might not be a problem for everyone, and if you're looking for a book with a fair amount of sex, this is your gig. The sex doesn't outweigh the story, and most the sex scenes are important to overall development, but still, a bit much sex.

The ending wasn't bad, but it was just...OK. While resolutions are often obvious in the romance genre, (and that's not my complaint), this one didn't evoke a strong emotional response where, even knowing how things would end up, I still get emotionally invested in the characters and the situation. While I liked the characters, wanted them happy, and liked the ending, I wasn't on pins and needles waiting for the resolution.
Posted by Unknown at 21:02