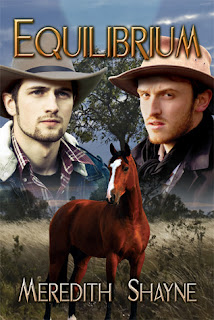 Length: 212 pages
Blurb
Welcome to Burreela, New South Wales. Population: more animals than humans. Although most (human) occupants are trying to get out of Burreela, the tiny town is the perfect place for veterinarian Michael Stone to break out of the bad habits that almost cost him the most meaningful part of his life: his profession.

Michael is struggling to regain his balance after hard personal losses and two years of promiscuity and drug abuse. He’s not prepared to meet Ryan Mitchell, a nice guy who won’t take no for an answer, whose patient pursuit leaves Michael less and less inclined to keep refusing. But Michael’s bad habits aren’t that far behind him. Can Michael hold himself together enough to be the man Ryan needs, or will he lose his equilibrium while trying to be man enough to hold on to the one he loves?

Overall
This was one of those stories that I enjoyed but didn't wow me. It was nice, sweet, and had some moving scenes, but in the end it wasn't particularly memorable. While there's very little I can point out as being a failing, there wasn't much that I'd mark as really standing out as a strength either. An enjoyable novel, but it didn't do much for me.

The story is fairly interesting, following Michael's struggles to overcome his past and not become the man he was again. Michael resists Ryan's advances for this reason, but Ryan is persistent. While I'm not saying Michael doesn't have plenty of positive attributes, I never really understood why Ryan was so very interested in Michael when Michael didn't seem (from how he behaved/what he said) to be interested in Ryan (despite actually wanting him very much). It seemed hard to find a reason why Ryan would be so interested outside of the fact that there aren't that many gay men in their small town.

Ryan is kind, understanding, and endlessly patient, but is also playful and teasing. He carries the most strength in the book, keeping the romance moving and making scenes fun while Michael carries all the emotional baggage and drama. It was a good mix.

Despite the romance lacking some credibility, I enjoyed the story, but despite that, this book just didn't grab me. Those looking for a drawn out standard romance may find something more in this work.
Posted by Unknown at 21:16