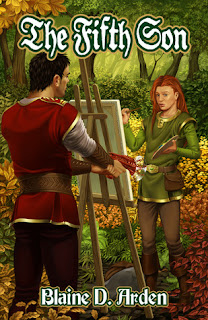 Length: 24,000 words
Blurb
Llyskel is the fifth son of a King, but, unlike his brothers, he doesn't have a career in politics or the military to look forward to. In a world where everyone possesses magic to some degree or other, Llyskel is powerless, unable to perform even the smallest magic-based tasks. All his life, he's been under constant guard for his own protection from the magical world around him, much to his annoyance. The only time Llyskel feels free is when he paints, where the only spells he needs are the ones he weaves with brush and paint, capturing moments of beauty and giving them immortality on canvas.

Llyskel harbors a secret wish, though, a dark desire that haunts his nights. Only Ariv, a captain in the King's army, seems to sense the truth of Llyskel's needs. The pull he feels to Llyskel is unavoidable, and the passion between them undeniable.

But Ariv isn't the only one interested in Llyskel. The Queen of a neighboring country expresses her interest in the boy's talents, but her true intent goes far beyond a love of art. And what she asks may be too high a price for any of them.

Overall
For some reason I had a difficult time sitting down to review this story. I enjoyed the writing, the characters, the world, and the relationship, but I still felt as if something were missing--or perhaps there was too much of something else. Still, the main characters' dynamic is appealing, despite having some difficulties coming to an understanding Llyskel's shooter kink (even being able to make the connection between it and gun kink). A good fantasy setting with interesting (although I'd like more development) characters, I'd recommend this easy read for a nice day on the beach.

Strengths
One of this story's strengths was the subtle world building. In many regards it follows a standard fantasy world construction, but there are enough nuances to add a special flare, and it was those touches that made it particularly strong to me. The description of a child's coming to power, the role of kings and queens, the weapon that focuses a user's magic, the use of magic in every day life and how it disrupts Llyskel's world and inhibits most things he does. In a short span the multitude of these minor elements all added up to paint world picture.

In addition to this, the descriptions used throughout the writing brought the story to life. The narrator is an artist and rightly gives beautiful (sexy) descriptions of the things he sees: flowers, men, fights, gardens, etc. It was gorgeous and sexy and one of my favorite things about this story!

As I mentioned before, I had some difficulties understanding Llyskel's thing for shooters, but I did enjoy how it propelled certain knowledge to come out and how Llyskel and Ariv deal with the obstacle. Their second bedroom scene is very nice. It helps that Llyskel gives vivid details about Ariv's appearances and the description of their night together is wonderfully sensual. I enjoyed my time with them ;)

Weaknesses
While I enjoyed the climactic action and resolution, the ordeal felt somewhat forced--or at least it didn't flow with the rest of the story. Logically it made sense and wasn't abrupt, but something about it felt off to me, as if the story itself were a fantasy romance with a plot tagged on. I was perfectly happy with Llyskel and Ariv exploring their relationship and the needs in that relationship, but I may be unique in that.

Received this book for review.
Posted by Unknown at 20:08