The Time of the Singing by Louise Blaydon 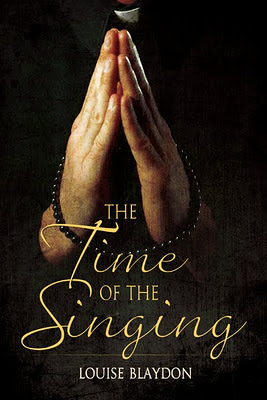 The Time of the Singing by Louise Blaydon
Stars: 4/5

Length: 200 pages
Blurb
Raised by devout parents, Israfel Vacek is a teenager before he realizes he may be turning into someone his parents would shun. When he confesses his fears to his brother, Michael suggests Raf might be able to save himself if he joins the clergy.

Though Raf is well-suited to the clerical life, enjoying the piety of his parishioners, his homosexual desires don't go away. Still, Raf is able to repress them, until one young churchman decides he wants Raf for himself. Nate Mulligan is a bundle of contradictions, a devout believer who insists their love can't be wrong, and Raf finds himself powerless to resist.

Overall
For people who get squimish about age differences in stories, be aware that the leading males are 17 and 29. Seventeen is the age of consent in the state where the story takes place, so nothing illegal is going on.

This is a very different novel and a very different romance. While it is indeed a romance, the religious themes and Raf's struggles are almost more central to the story. Of course, if it weren't for the romance in the novel, Raf's struggles wouldn't be revealed, so the two go hand in hand. For people looking for a light, modern romance, this isn't going to be the story for you. The religion in this novel definitely gives the story more weight, and steals some of the show as Raf anguishes over anything that would make him happy—but disappoint his family and church. I still felt it was enjoyable, and those who like religion with their romance will be pleased with how this story unfolds.

The writing is in third person present tense, which may distract some readers, but after a while, I didn't notice, though each time I picked up the book, I was like “Oh hey, it's in present tense!” (Yes, almost every time. Which was probably thrice.) The writing was strong and artistic, providing details about the actions and surroundings that may not be necessary to the events but paint a lovely image. However, keeping this in mind, the writing style and tense may not suit everyone's personal tastes.

Strengths
Blaydon either researched this novel thoroughly or has expansive experience with the Roman Catholic Church and the priesthood. Everything was extremely realistic, and although I'm not an expert, I was raised Catholic and it felt believable. What I also liked was that the author didn't villain-ize the RCC either. While the church wasn't shown accepting homosexuality (which would have been misleading), it was portrayed as “homosexuality cannot always be 'fixed' and if so then the person should just live a celibate life,” which is what the main character is doing.

Religion obviously plays an important role throughout the novel and both main characters are extremely religious, although Nate is more liberal in some of his philosophies about religion and the Church. I felt the balance between representing “old thoughts” (mainly through Michael, Raf's brother) and “new thoughts” (via Nate) was well handled and although it sides with the new (wouldn't be much of a romance novel if it didn't), the more traditional mindset wasn't degraded, just disagreed with.

The feel of the novel, whether it is Raf's faith, the everyday church activities, or the affair with Nate, really worked to build this into the story it ultimately is. While the events evolve slowly to culminate in the climax, the story isn't so much in what is happening, but everything that's going on as it is happening. How Raf faces truths and confrontation is really the focus of the novel, making it more a study of people and humanity―and faith―than just a character study.

Weaknesses
Some of the ending felt a little too happily-ever-after, and it could have ended earlier. However, this is personal preference, as some may have equal complaints if it ended otherwise. I didn't mind the extended ending, but things worked out too neatly, I felt, even if it required some broken relationships. In addition, Michael, who plays such a major role in Raf's life, is never given a complete resolution. While this is realistic, I felt like some type of confrontation between them would have been warranted.

One point that I'm not sure is a weakness, but I've seen mentioned elsewhere is that Raf falls into bed with Nate very quickly. I felt it represented how unfit Raf was for celibacy, so it didn't bother me, although to some degree it was unnerving that he was willing to break his sacred vows so quickly.

Nate as a whole is difficult to read, since we never see inside his head. From the beginning he is cocksure, confident, and a bit of a player. When he and Raf fall into bed, it is understandable that Raf thinks Nate is just sleeping with him for the novelty, or just because he's “available,” leaving Raf feeling unsure of where he stands. Nate seems to be very religious, but has no qualms with his sexuality or premarital sex (with different partners at different times). He felt like bit of an enigma to me and I imagine to Raf, and I would have liked to have gotten to know him better so he didn't come across as such a hyper-sexual teen. On the other hand, that is how Raf thinks of him, at least in the beginning, so maybe this was intentional.

Despite the number of weaknesses, or potential weaknesses, I found this novel to be intriguing in the choices it makes and the directions it heads. I think the story fits best with readers with an interest in religion/spirituality, but I would not dissuade any reader from picking up this book.

Requested this book for review.
Posted by Unknown at 21:58