A Fluffy Tale 2: Warm and Fuzzy by Ann Somerville 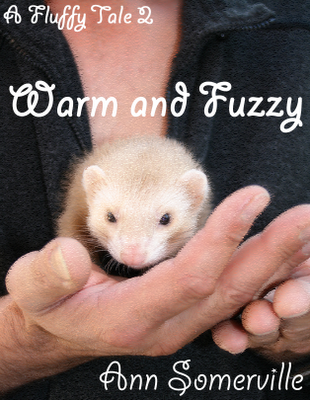 A Fluffy Tale 2: Warm and Fuzzy by Ann Somerville
Stars: 4/5

Length: 56,000
Blurb
Daniel wants to be an engineer, but when his parents die in an accident, he gives up his studies and takes a office position to support his young brother and sister. He hates his new job, but never expects to find himself in serious danger, or to need help from the amazingly tall, kind and good-looking Spen, his friends, Julian, Leo and Zachary, and, of course, their clever kems.

Overall
A lovely follow-up story to the first, this novel has the same delightful kems, some return characters, plus new characters and more action. Although the character development isn't as in depth, the quicker pace gives good character growth in a shorter amount of time.

Despite some of the heavy topics dealt with in this novel, this isn't an overly emotional story, as the weight of the matter is balanced out by the strength of the characters. I found this to be a charming tale with charming characters and an overall warm feeling throughout the story. A good tale for curling up with on a relaxing day.

Strengths
Sometimes writing is so good you cannot help but notice the poetry of the language. Sometimes it's so bad you cannot help but notice the bumbling language. This writing is so natural that you do not notice it. You float along the words that carry you through the story. The writing is good, strong and consistent, but because the story demands it, the writing becomes secondary, letting the characters and the plot blossom.

There is a relatively simple, but enjoyable plot that allows some action and heated emotions to bleed through while dealing with the larger events, but the main characters aren't stars or heroes, just characters like you'd expect to happen in real life. I like that the plot almost seems to happen around the characters rather than to the characters and much of it is outside their control. In addition, the simplicity of the plot allows the reader to focus on the characters and relationships.

Spen and Daniel's dynamic brings a certain level of comfort to the story, as they both come across as being very human in their reactions and emotions. Spen is trying to be a good guy and a good friend, while Daniel struggles to not be viewed as a victim or a charity case while not wanting to push Spen away too far, since he likes the guy. As with the previous novel, I like that the romance isn't rushed but developed over time. This allows us to get to know the characters and let their relationship come across organically.

Weaknesses
Oddly enough, despite this story having a stronger element of “rich man swoops down and saves poor man,” it bothered me less here. Maybe because the poor man did need saved and it wasn't on a purely financial level. Maybe it's because I have a giant soft spot in my heart for Leo. Maybe it's because Daniel needs to be saved so very much and I'm a romantic. Either way, be warned that money is used not to solve problems, necessarily, but definitely to make life peachy-keen. However, the events surrounding the use of money to solve problems is secondary to the main story and isn't really a weakness in my estimation.

Although there were very few (to no) weaknesses in this story, it also lacked anything to really blow me away and impress me, thus keeping it from a 5-star rating. However, it's a good, solid tale that's well written, plotted, and developed.
Posted by Unknown at 20:27