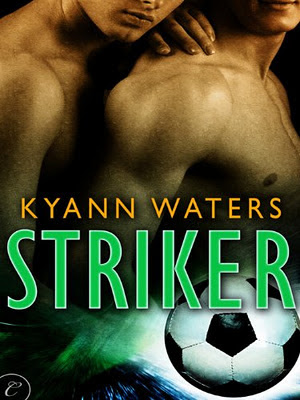 Length: 16,000 words
Blurb
Sports writer Max Myers just discovered he lives next door to the hottest soccer player to hit the field. If he scores a coveted interview with the reclusive striker for the Denver Blaze, he could take himself from sports blogger to mainstream sports authority.

Riley Grayson has no interest in interviews or in outing his private life to the public. He wants to be known for the scoring he does on the field and not in the sack. But Max is a temptation he can't resist. Taking a chance, Riley and Max discover they have more in common than passion for soccer and hot sex between the sheets.

Just as they begin to trust each other outside the bedroom, Max is put in a no-win situation: write an article about Riley exposing accusations of drug use, or risk destroying his own credibility. If he does, he'll lose Riley. If he doesn't, he'll lose everything he's worked hard to achieve.

Overall
This novella is first and foremost erotica. While the premise is interesting, the sex overpowers the plot, and heavy sex stories aren't my cup of tea. These especially didn't really do it for me. In addition, the plot had more potential than was explored. If you want hot, heavy sex with soccer players, this is the book to go to, but otherwise, it doesn't satisfy many appetites.

Strengths
The writing was good, and sound enough that I would consider reading something else by this author, and some people with different tastes may enjoy the content of this story, but for me, sex isn't enough to drive me to continue reading or recommend this story.

Weaknesses
Too much sex and not enough plot. In addition, the sex didn't really grab me either, although that could purely be a personal preference. I found it to be a little heavy on over-used language. Finally, during the sex scenes, certain terms threw me out of the story: He slid a fraction deeper. Max moaned as the muscles melted and Riley slid deep into his rectum. Whether or not it is factually correct, there is just something that makes me scrunch my nose at the use of the word rectum, potentially due to it sounding more medical than casual.

Because so much of the story revolved around sex, the characters felt a little flat to me. The struggle of "if I reveal this it could ruin my career" seemed almost too easy to overcome, and Max didn't seem to struggle at all with going against what Riley asked--demanded--he not do. Obviously Max knew he wouldn't do anything to harm Riley's career, but he didn't seem to be weighted by the thought of hurting this man he loved, either.

These two fell into the sack extremely quickly due to their instant chemistry. I would buy it if Riley didn't have so many reservations about his privacy. In one paragraph he goes from thinking he shouldn't sleep with Max to the next paragraph where he propositions him. Considering Riley was supposed to be worried about exposing himself to a reporter, he seemed to have no qualms doing just that to a man (and journalist) that he just met.

Requested this book for review.
Posted by Unknown at 21:23