A Solid Core of Alpha by Amy Lane 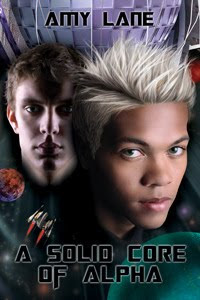 Length: 100,000+ words
Blurb
In an act of heroism and self-sacrifice, Anderson Rawn's sister saved him from the destruction of their tiny mining colony, but her actions condemned the thirteen-year-old to ten years of crushing loneliness on the hyperspace journey to a new home. Using electronics and desperation, Anderson creates a family to keep him company, but family isn't always a blessing.

When Anderson finally arrives, C.J. Poulson greets him with curiosity and awe, because anyone who can survive a holocaust and reinvent holo-science is going to be a legend and right up C.J.'s alley. But the more C.J. investigates how Anderson endured the last ten years, the deeper he is drawn into a truly dangerous fantasy, one that offers the key to Anderson's salvation—and his destruction.

In spite of his best intentions, C.J. can’t resist the terribly seductive Anderson. Their attraction threatens to destroy them, because the heart of a man who can survive the destruction of his people and retain his sense of self holds a solid core of alpha male that will not be denied.

Overall
While I really, thoroughly, enjoyed this novel, it feels like nothing I've read before. While a romance was definitely central to the story, there was so much else going on. The psychological and emotional issues the two main characters need to work through and overcome are the main focus of at least the first three-quarters of the book. While Anderson has spent ten years alone on a ship with only his self-created holograms to interact with, C.J. has issues of his own involving commitment and a fear of taking on responsibility. But what Anderson needs most is stability, and C.J. is there for him, although all his friends and family warn him that Anderson is going to hurt him.

This is an emotionally moving book, but the hurt doesn't hit all at once. Instead of a sharp stab for a chapter or two like most books, this one spreads the pain over a good portion of the last quarter. It's not overly angsty or woe-is-me, though. It's an honest ache as the characters struggle to deal with heavy-duty challenges. In many hands this novel would have been terrible, but in Lane's it flourished, making the reader question what is real, but never questioning if love can help us heal. (Gee, am I much of a sap?)

Usually after reading a book, I know what I'm going to write for the review, or at least have an idea. After finishing this novel, my mind went blank and all the voices went quiet...

Strengths
The story is amazing, like one of those "you won't believe they survived" tales they show on (bad) television. Erm, except this isn't bad television, but great story telling. Lane handled all the characters extremely well, especially considering the delicacy of the situation. Anderson was an inventive and interesting character who didn't go the way I expected him to and I was still pleased with what Lane decided to do with him. She put the necessary thought and consideration into many minor and major elements that would effect the characters, especially Anderson, both psychologically and world-building wise. I enjoyed the romantic parts of the book, but it was interesting just to watch Anderson's progression from the first page to the last.

The writing, as I mentioned, was excellent. If it weren't for the strength of the writing, I don't think this novel would have been nearly as enjoyable, or perhaps even bearable. The author was able to bring the story and the characters to life, which was vital for this telling.

The characters were a colorful bunch who all wanted to be helpful, but were still very human with their quirks and weaknesses, which made their place in the story all the more real and made them interesting counterparts to the holograms.

Weaknesses
The only weakness of this novel, and it may not be a weakness upon re-reading, is that while I loved the characters, I was involved in their struggles and aches, I never fell so deep in their headspace that I lost myself. It was an amazingly well-done story, but I think the events were so outside my brain's capacity to relate that I had difficulty connecting. Or else I wanted it to be more angsty, I'm not sure. I look forward to re-reading it and trying to let myself sink into the characters more.

Requested this book for review.
Posted by Unknown at 18:02