Other Side of Night: Bastian and Riley by SL Armstrong and K Piet 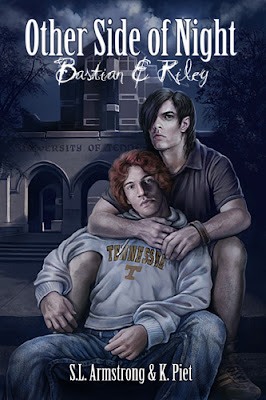 Other Side of Night: Bastian and Riley by SL Armstrong and K Piet
Stars: 3.5/5

Length: 47,000 words
Blurb
Vampires walk among us. For centuries, they have adapted, learning to pass undetected in our world. They no longer fear the day, only the sting of direct sunlight. They are students, bankers, lawyers, and even actors. But when the sun goes down, they are all united by their eternal thirst. We do not see them from our safe and comfortable side of the night. But sometimes, one of us is drawn away from the light and we cross into their world. Into the other side of night.

Sebastian Rossi's second year at the University of Tennessee began much differently than his first. He rushes to and from his classes, covered head to toe in thick clothing. Parties are a thing of the past, and dating hasn't been high on his list of priorities. No, high on his needs is blood. Lots of it. Adjusting to the changes no one even told him would happen following one great night of partying and sex has been hell for Bastian, but he's managing.

Riley Lynch's dream is to be a veterinarian. He works hard to pay his tuition, reads in every spare moment, and tries to forget the nightmare of his sophomore year. Summer has washed away all the bad, leaving him refreshed and eager for his junior year at UT. Life is finally looking up for him, and he has no intention of sliding back down into the depression that had consumed him during his last relationship.

A chance meeting brings their two worlds into alignment and passion sparks between them. When Riley learns of the changes Bastian is going through, he has a choice to make: walk away or embrace the night.

Overall
This story takes place in a traditional vampire world with a very different sort of vampire as the focus. Instead of the sexy, suave vampire, we are given as our lead vampire an average college student who has to figure out this new world on his own. Although the majority of the premise isn't earth shattering, the writing and story telling is excellent, and the authors delve into less common vampire lore, which is refreshing.

I would recommend this book for people who love reading vampire novels and are willing to give something a little different a chance. Also a good read for people who like contemporary romances, as long as they don't mind a little of the fantastical thrown in. While not an exceptional novel, it was an enjoyable read--perfect for the beach or curling up with on a lazy weekend.

The characters are cute and it was interesting watching them work through their struggles together. Riley, who protects his heart due to a previous relationship's experiences, seems to be the perfect, patient boyfriend until he becomes (understandably) a bit of a hypocrite. I loved how Riley deals with things by putting them in boxes and how facing what Bastian is forces him to come to terms the difficulties he had in his previous relationship. Bastian, on the other hand, struggles to deal with what he is, and feels like he never does anything right. Overall, his reaction to becoming a vampire and how he handles everything felt realistic.

The authors took the time to explore the progression of Bastian's vampirism. Nothing was gory, but there were some nice details added, especially the transformation of the fangs. I found the authors' treatment of the creation of vampires to be good, going into some details without boring the reader with too much info about a topic almost everyone is familiar with.

Weaknesses
While this was an enjoyable read, the story and world weren't very unique. For some this may be considered a positive, as the world complies to the standard vampire existence, but it definitely isn't the strongest part. Points off for creativity in that element. This is probably shown most in the character of Havva, who plays the controlling, powerful, and sneaky ruling vampire. Some may see her as everything a vampire should be, but I felt she was a touch cliche and found her arch of the story involving her to be the slowest moving.

Received this book for review.
Posted by Unknown at 19:37