By Any Other Name by Tia Fielding 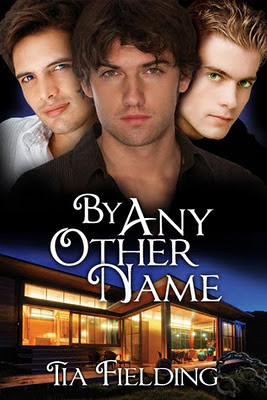 Length: 200 pages
Blurb
Dru and Thom have been together for three years, and despite Thom’s occasional bouts of insecurity and Dru’s fear of rejection, their relationship is rock solid. Then Dru’s long-lost friend, Skye, suddenly reappears, shocking them both. Skye suffered years of inconceivable abuse before escaping it, and while he’s back on track, he has nowhere else to go as he begins to rebuild his life.

Dru, Thom, and Skye each want to belong somewhere, to belong with someone—or someones—with no fear of being hurt, set aside, or left behind. It’s a challenge with daunting odds, especially for Skye, who’s never loved before. He’s determined not to come between his two friends who so clearly belong together, and it will be up to Dru and Thom to conquer their fears and convince Skye to stay.

Overall
Although a well-done threesome is something I love to read, I'm always hesitant to read one, because well-done threesomes happen so rarely. However, I liked the dynamic the blurb hinted at, so I gave it a chance. After reading the first few chapters, I wasn't incredibly taken with the writing. It was okay, but a little stiff overall and the flow was sometimes unnatural. However, the story and the characters kept me going and as the three men struggle to find balance in their lives, I wanted to know how everything ended up--even if the genre gave me a good idea of how it would be.

In a strange way, even though I wasn't in love with this novel, I really enjoyed it. It was a tad slow moving in order to provide adequate character development, the writing was so-so, but the characters are all highly enjoyable, including minor/side characters. I'd definitely recommend this to people who like reading about threesomes. There are a lot of psychological and emotional issues mentioned in this book, and they all play a pivotal role, however, because there is so much and three characters (instead of two), the psychological elements don't get as much development as I like. They still are important, and are well utilized, but the story doesn't focus too heavily on the psychological issues.

The characters are all sweet and wonderful, despite their weaknesses and failings. Sometimes they seem to get along too well (because we all know how often arguments happen in a two-person couple), but it's easily forgiven since so many other obstacles stand in their way. Despite some of the grim topics, this is a happy book with overall happy characters who want to help one another, not hurt one another, and find their happiness.

There is an adorable epilogue that I wasn't expecting and, honestly, it comes out of the blue a little, but it's cute, funny and a nice way to end the book (and almost pushed the score to 4).

Weaknesses
The writing was the weakest part of the novel, and even that wasn't unbearable, just slightly stiff. However, that, in combination with an overall placid plot, left me mostly uninvolved with the story. It was enjoyable but not captivating, and sadly kept the story from earning a higher score.

There was a slight jump in Skye's capability to perform sexually, which, while it made for a pretty hot scene, didn't feel realistic.

Requested this book for review.
Posted by Unknown at 07:18