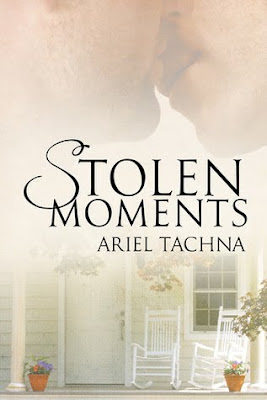 Length: 210 pages
Blurb
After a year apart, teacher Jacob Peters and county judge Beau Braedon decide they can’t live without each other. There are just a few small obstacles to their Alabama love story. Jacob resents Beau’s paranoia about being outed, but Beau is convinced he’ll lose his seat on the bench if he admits to their relationship, and as a teacher at a Christian school, Jacob’s job is even more at risk. They could relocate, but Beau’s mother has Alzheimer’s and can’t be moved. And then there’s the tiny issue of Jacob’s infant son, Finn, and his mother, whom Jacob wed out of duty. In short, they are stuck.

But Beau has a long-term plan, and he’s prepared to swallow his fears and compromise with Jacob, because sharing stolen moments is no longer enough.

Overall
While there are moments of this novel that I enjoyed, such as how the resolutions were handled, how the characters reacted (sometimes), and the general concept, I had difficulty connecting with Beau, struggled to feel the connection between the two men initially, and had to force myself to keep reading what is a slow-paced story. The things that are done well weren't done quite well enough to overcome the problems I had with the story, but for readers looking for a slow, "second chance"-type story, this may be right up their alley.

Strengths
The struggles the two men go through at the end are touching and sweet as they stick together and persevere. Although some moments seemed a little ridiculous, I was willing to let it go as part of "small Southern town" stuff.

When the men are human together--not worrying about their jobs, their secrecy, or their dicks--the story is a warm tender tale. However, these moments are rare and were barely enough to keep me reading.

Despite my largely negative review, this story will read better for some readers than others. The story wasn't bad so much as bland, leaving me unimpressed and feeling it was largely forgettable. This isn't a story I'd recommend, but it's not one I'd wave red flags all around either.

Weaknesses
The uninspired prose felt sex heavy and plot light. Although the story wasn't unbearable, too much time was spent on them being apart from one another and only getting together for sex, leaving me to see very little development of their relationship at first. Their moments together not talking about what they are going to do or having sex are nice and develop the characters, but these instances seem too few.

Too happy of an ending. Things fell into place too easily, making all the worries and fretting from the beginning seem unimportant--and left me even more frustrated with Beau. While I wanted the men to have a happy ending, this fell into the almost-unrealistic end of the spectrum.

Requested this book for review.
Posted by Unknown at 20:07