The Ronin and the Fox by Cornelia Grey 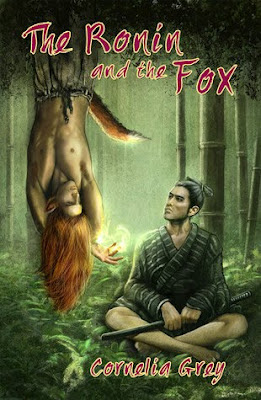 The Ronin and the Fox by Cornelia Grey
Stars: 5/5

Length: 32,000 words (85 pages)
Blurb
In feudal Japan, Kaede Hajime lives as a vagabond ronin, a samurai without a lord. As he spends the night at a village's inn, the innkeeper begs him to help stop a mischievous kitsune, a fox spirit, plaguing their village. But when he captures the spirit—in the form of a hauntingly beautiful man—Hajime learns that the kitsune has troubles of his own. The pearl that contains the fox's soul has been stolen, leaving him a slave to the new owner, who is forcing him to attack the village.

Hajime agrees to help the fox retrieve the jewel, but living with a fox spirit isn't easy, and the budding trust between them is constantly tested. Kitsune are tricksters above all, and Hajime must decide how much of the story the fox tells him is truth. What's worse, an old comrade of Hajime's is in town, bringing with him the sour memories of Hajime's time as a samurai. Hajime must find a way to locate the thief and steal back the jewel before the thief turns the kitsune's considerable power against him.

Overall
A passionate, heart-felt story, this will especially appeal to readers who like Japanese mythologies, mischievous spirits, and honorable samurai. While the cover and title caught my eye (and perfectly represent the story told within), the pages within didn't let me down. I was quickly drawn in by the serious ronin and the playful kitsune and the troubles they find themselves in and their struggles to trust one another.

Strengths
Despite most of the time our only two characters are the leading men, I never became bored with them. They are entertaining and mysterious enough that as everything unfolds, it's enough just to find out more. These aren't flat characters. The honorable samurai who was too honorable and lost his lord, and the mischievous kitsune who isn't causing problems because he wants to (this time, at least). They can't trust one another, but they have no one else they can trust. It's a wonderful dynamic that plays out perfectly.

While the story being told isn't incredibly new or surprising (for me, at least), it does incorporate fresh elements and there were enough unknowns to keep me curious about how everything would turn out. The pacing was perfect, dragging out curiosities until the end without ever slowing down the story. Much like it's setting, there are almost meditative qualities about the telling, which brings the tale together nicely.

Grey does an excellent job of setting the scene in a historical-esque story that is unfamiliar to many readers. She provides the necessary information without bogging down the text and keeps the craft ahead of facts, although facts are not necessarily lacking.

Weaknesses
The only moment that stuck out as being a little odd was after Hajime meets the fox. While previously I felt a sense of urgency at needing to stop the events and help the village, instead there is a drawn out period of time together. While obviously this is needed for the two to get to know each other, for healing, and for resting, the sense of hanging out seemed too casual considering Hajime was supposed to be doing a job. However, this niggle was very minor (and inconsequential), and did not detract from the book's enjoyment.

Received this book for review.
Posted by Unknown at 19:56