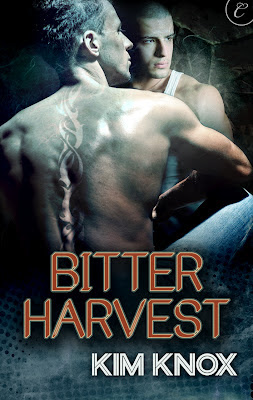 Length: 30,000 words
Blurb
It's 2050, and humans are an endangered species. Lieutenant Robert Sutton has survived the collapse of civilization by luck, his wits, and a chance mutation that makes him immune to the nano-virus that has wiped out millions. Now, his compound of survivors is surrounded by the infected, who are driven by the need to spread the contagion through sex. It is only a matter of time before they attack. So when Sutton is assigned to interrogate a prisoner who claims to have overcome the infection, he immediately suspects a trap...

Nicholas Rider may have survived the virus, but he's a changed man, ruled by his desires. But his need for Sutton is different. Rider craves an end to his overwhelming needs, and Sutton could be the man to do it.

Secure in his belief that he's invulnerable, Sutton can't understand or resist his intense attraction to his prisoner. Will Rider be his downfall-or his savior?

An interesting story with an inventive resolution. Everything fitted together well and left me satisfied with the story as a whole. Also, I loved the little comment about the bees. Brilliant and subtle.

Strengths
The world creation was very impressive in this story. In the short amount of time, the author painted a dark picture, used dialogue to fill in knowledge gaps, and provided all the necessary information without bogging down the story. The visuals, while sparsely provided, were enough to help the reader envision the world, relying more on reader experience and intuition than description. Definitely the strongest part of the story.

While I found parts of the ending a little too much, for the most part the resolution and the plot leading up to it were excellent. I didn't know where things were going and I liked the journey we went on while being taken there.

Weaknesses
A little too sex heavy for me, but that is preference. However, it did detract from character development a little as both men seemed to think with their little heads too much to create more in depth realizations. Still, it wasn't so much sex that I rolled my eyes, and most of it was glossed over, giving the feeling of lots of even more sex without bombarding the reader with scene after scene of it in hot nano-infected detail.

Requested this book for review.
Posted by Unknown at 18:57