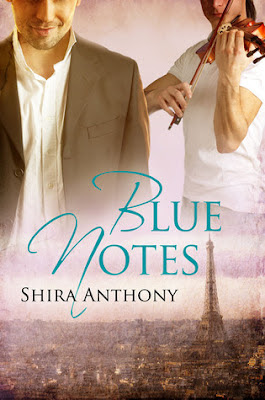 Length: 227 pages
Blurb
Blame it on jet lag. Jason Greene thought he had everything: a dream job as a partner in a large Philadelphia law firm, a beautiful fiancée, and more money than he could ever hope to spend. Then he finds his future wife in bed with another man, and he’s forced to rethink his life and his choices. On a moment’s notice, he runs away to Paris, hoping to make peace with his life.

But Jason’s leave of absence becomes a true journey of the heart when he meets Jules, a struggling jazz violinist with his own cross to bear. In the City of Love, it doesn’t take them long to fall into bed, but as they’re both about to learn, they can’t run from the past. Sooner or later, they’ll have to face the music.

Overall
While this story has some shining moments, the writing, the "rich man rescues poor kid" trope, and the beginning kept me from rating it too high. Initially I was concerned the book was going to end up on my rare DNF shelf, but it kept my attention enough to read through to the end. It picks up after its rocky start and some readers may be more forgiving of the negatives I point out, especially those who love Paris stories with music focuses and a slight age gap between protagonists.

This book did nothing to make me hate it, and most of its weaknesses fade as the story continues (although most never vanish). Still, it wasn't enough to enamor me to want to re-read it, thus the wavering 2.5 score.

Strengths
Music played a wonderful role in this story, working to bring the men together, express emotions, and challenge Jason while giving something for Jules to be successful in. Unlike the forced feel of the locale name-drops, all the music references felt organic in the story.

Although the beginning of the story didn't impress me, the latter-middle part hit its stride and carried me through. The characters' interactions seemed more plausible and heartfelt as Jason struggled to deal with his feelings--both recognizing them and verbalizing them--and Jules coped with all his insecurities. Rosie also makes more appearances, pushing everything she wants into place. Although some of the end verges on an eye roll, the strength of the middle section kept this story from falling in on itself. Despite (or because of) the Big Misunderstanding, I struggled with the sadness the characters felt and was rewarded with the eventual resolution.

Weaknesses
The writing suffers mainly from telling too much and over explaining, which probably annoys me more than the average reader, but still gives it a stilted and amateurish feel. It only flickered on the rim of my focus, but like that shadow you see out of the corner of the eye, it was distracting.

The author is obviously in love with Paris, as the characters played tourist and the reader learned all about the sites. Sadly, these parts sounded to me like name-drops more than setting the location. I didn't get a feel for France from the grand architecture and hot spots--instead, the taste of locale bleed through best in the more intimate moments of breakfast consisting of bread and cheese, pastries, and the likes. I wanted to feel that all the time, but then the main character would go for a walk and we'd be bogged down with the names of places again.

While I'd have to re-read to be certain, this story suffers from magical perspective. Initially the entire story takes place from Jaz's perspective, with his thoughts coloring everything. For the majority this holds true. But at some point the perspective is opened up to Jules and Rosie. While there could be some benefits in seeing in the heads of both lead men, it was too inconsistent.

While the development of "love" took its time and I felt was pretty well handled, the initial "Oh, hey, come home with me" was unbelievable. I couldn't fathom any reason Jaz would let a complete stranger stay the night when it would be much more likely, if he were going to invite him home at all, for him to stay until the next bus could arrive, since that was the "reason" for the invitation anyway. While obviously there needed to be a catalyst that drove them together, the one we are provided is not very plausible.

While it didn't particularly bother me, and most just made me roll my eyes in good humor, this story does have a Big Misunderstanding. If you don't like that, you'll probably want to stay away from this classically performed example.

Requested this book for review.
Posted by Unknown at 18:00