The Tourist by Clare London 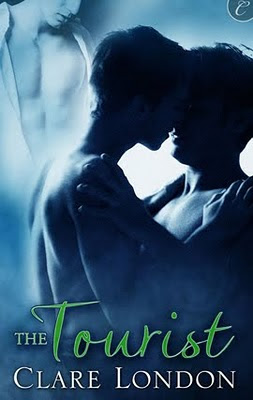 The Tourist by Clare London
Stars: 3/5

Overall
Normally in reviews we talk about "head hopping" from a narrative perspective, but in the case of Ace, our narrator, we literally hop heads with him. Although he's a little pompous and self-centric, he's a bearable narrator and he grows (on the reader and as a character). In an interesting twist on the normal "switch perspective" trick, London uses Ace to not only change perspective, but also to retain some of the memories and feelings that were in his previous host so that he can use that information to further the relationship.

Strengths
Unique perspective. This was a really creative writing tool and London did a good job of writing four different perspectives, often two at a time. We have Ace constantly present, and then the different men he hops into. Initially we see him more separate from his hosts, but as he lingers in their bodies (and as the story needs to progress) we see him and his host as one and the same, although there is still a struggle as Ace cannot know all the deep secrets that the host is unwilling to admit to himself.

Writing. London did an excellent job of writing a difficult subject without doing too much or too little. The characters, while minimal in number, are very different in personality. This worked out just not from a plot point, but also because it allowed the narration to change dramatically depending on who was hosting Ace.

Weaknesses
Not necessarily a weakness, but Ace as a character bothered me. His personality rubbed me the wrong way, but not enough that I threw the book down and didn't continue. Some may find his sort of pompous attitude charming; it wasn't like he was a bad guy, he just didn't endear me, so I had difficulty getting into the book initially. Once we stepped back from his direct involvement and were more focused on the two other central character, I found myself able to relate better. He does improve as the story progresses, as well.

Some of the character developments, especially in Dan, left me curious, as I didn't feel as if the reader was given anything to be prepared for that particular turn. However, that said, I didn't feel like it was a random course of action either; it fit the story well and was established in the characters by the end—just the initial action surprised me.
Posted by Unknown at 07:07