Just for You by Jet Mykles 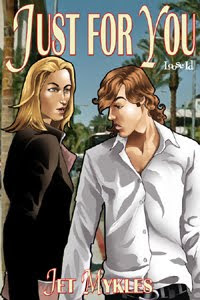 Overall
When Justin sees Kevin, he professes his love on the sidewalk. Only Kevin is straight, right?

Wouldn't be much of a story if he were, huh?

The basic premise of this being a gay-for-you story doesn't actually focus much on the "huh, I like guys" part, which tends to be central in other stories of seen of this type. Instead, while everyone (Kevin included) is curious why Kevin suddenly is interested in Justin, he isn't going through a crisis over that. I felt it was refreshing that he didn't panic over that, and although his acceptance was strange, I think it worked with his personality. Though I still wonder why everyone focuses on him being gay when he's obviously still attracted to women, thus is bisexual. But aside from one mention toward the beginning, it doesn't get brought up again (bisexuals get the shaft so often in these stories).

This was a pleasant enough story with a cute premise and lots of humor in the beginning and the right amount of frustration at the end. You have to take the premise and some of the characters with a grain of salt, but it's worth the taste!

Strengths
The writing was solid and I especially like the characterizations of Justin and Kevin and how they were portrayed. Mykles created a nice dynamic that was mellow and easy (and then has the characters point it out, since it does seem too easy, which was a good trick to use). I liked some of the side characters (their friends and coworkers), and I'd love to see more of them (or have seen more of them), though not having it didn't detract from the story. It's the sign of a good story that I want more of the characters.

Weaknesses
I wasn't floored by the story, although it was funny and cute. Victor's dealings at the end kind of made me wrinkle my nose and go "really?" but it was within the suspension of disbelief. Otherwise, my mediocre rating is because this story didn't really call out to me and impress me. Good, but not great.
Posted by Unknown at 21:18