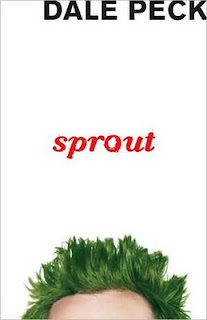 Overall
I both loved and hated this book--which may leave you wondering why I still gave it 4 stars. The short answer is that the book got under my skin, and any book that really gets under my skin and has me loving and hating characters (often the same character), has to rank higher than a 3. Maybe it's a 3.5 that I bumped to a 4. We'll say I liked the cover enough to do that.

Warning, some content below may be seen as spoilers

Our narrator, Sprout, is a fun guy to listen to and lead us through the story. He's honest (in a roundabout sort of way), funny, and tells plenty of anecdotes, many in the form of essays he writes for Mrs. M. He hasn't had the worst life, but he hasn't had the best one either. It's not really a surprise that he's a little unbalanced in some elements of his life. Isn't everyone? Even the other people in the story have issues...one's in the closet, one has delusions of becoming famous, two are alcoholics (at least one is especially), and one has an abusive father.

There are so many things wrong with what happens in this story (not technically, just morally). People are so extremely people that you can't help but love and hate them. You want Sprout to come out the winner because he's the hero of this narrative, but this isn't necessarily that type of story. That's something you'll have to decide for yourself.

One part that seemed technically wrong to me is the abuse. I felt like the school wouldn't handle it that way, even if the kids refuse to talk. It also made me want to know why Sprout never said anything, never tried to convince him to admit what was going on. Maybe it's part of the Teens Don't Talk About That sort of thing, and obviously some of it needed to happen to make the story progress, but it irked me a little.

The end left me frustrated, then thoughtful, then frustrated, then worried, then frustrated...and you get the idea. It makes me want to re-read it to understand something I must have missed. If you need a resolute and happy ending every time, look elsewhere. If you're willing to fly by the seat of your pants, at least this once, then give it a shot. You may find your happy ending after all.
Posted by Unknown at 19:15