Tigers and Devils by Sean Kennedy 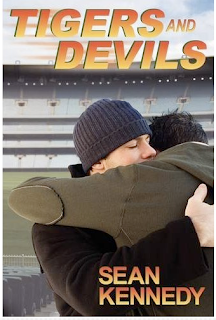 Overall
Not being what one would call a sport's fan (I'm a fan of sports, but I'd rather be playing...), my first glance at Tigers and Devils had me going "Well, I'm sure it's good, just not for me." But after hearing enough good reviews, I gave it a shot and am glad I did. While the sport and its surrounding fan-base play a pivotal role to the story, the scenes aren't heavy with description of the sport (which is good, since I wasn't familiar with it at all, aside from some wiki browsing).

Kennedy explores a real relationship being built from the ground up, dealing with everything from misunderstandings to well-meaning friends and the complexities of one person in the relationship not being 'out.' While Simon can sometimes be a "wanker," he never crossed the line of being obnoxious to me, and since everything is told from his perspective, we see all his insecurities laid out in text (aka, this story probably would not have worked from Declan's perspective). This story is sometimes bitter, sometimes sweet, but overall satisfying.

The only reason this story didn't rank a full 5 stars is because while I enjoyed it, it did nothing to WOW me.

Strengths
Characters. We have two opposites attracting: Declan, handsome, confident and suave (most the time), meets Simon, reclusive, insecure, and "average," at a party Simon's friends dragged him to. Simon is brutally honest, jaded and self-deprecating to the point that he believes what he's saying more often than not. But he's funny, witty, and a nice guy once you get past the spikes. Declan is down to earth and nice, which is rare in his field, insecure pretty much only in relationships, and patient (really, really patient). They clash, but only in a surface tension way until their personalities find out their puzzle pieces were just facing the wrong way and then click...they balance one another out. NOT that it stops problems from happening.

Realism. While this story hits upon several "cliches" (opposites attracting, one in the closet and one out, person with tons of money and one not), it never falls into a cliche story. It holds true to realism, sometimes painfully as people get upset for reasons that aren't what they're saying they're upset about and others don't apologize when they know they've been wrong (OK, those are mostly the same person). There are multiple points where a happy ending could occur, but it doesn't because the author knows the characters haven't learned better and that's what this story is about--character growth, not romance--although the romance is the key to growth (but not the sole factor). It lends to the realism that the happy ending doesn't happen when we think it will, because our happy times are often followed at some point by unhappy times.

Weaknesses
Length. I enjoyed the length, but I could see some people struggling with it, especially since it wasn't always a fast-paced story. This book doesn't function off of action-plot as much as it functions off emotional and psychological plot as we watch the development of the relationship, but also the evolution of Simon from a bloke with two real friends to a man surrounded by a team of people. Because of the minimal action-plot, some people may feel this is slow-paced and boring. I disagree, but I enjoy character studies.

Sex. Again, I didn't see this as a weakness, but I thought I'd say it...there is no, or very little, explicit sex. I could only imagine how long the story would have been if he had included it and I didn't feel like I was missing out at all. It was actually rather refreshing, but if you want hot action, this isn't the book to pick up.
Posted by Unknown at 17:52