The Wish by Eden Winters 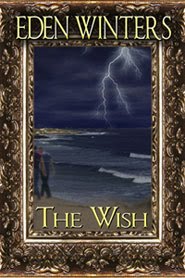 Overall:
A touching tale of love and family, of being who you are and not what's expected of you. A story of trust, change and true love.

What I liked
Characters. They were good and likable, even Alex (the player). This story worked because the reader knows there will be a happy ending (we put that trust in the author) and we are not disappointed, bittersweet though it is. We get to watch the characters progress, which is the main focus of the story, and they overcome their challenges.

PoV. The previous Winters book I read (The Angel of Thirteenth Street), I complained that the perspective changed too often and should have stayed with just two characters (and been more evenly distributed among them. This book did the same thing...and yet it worked. What's the difference? Well, I think there were several changes that made it more acceptable. The rotating perspectives are consistent throughout the book, not just popping in halfway through. They also are repeated so that no one voice only appears once. Both of these worked to give the story a wide view without feeling disjointed.

Sex. There are only two sex scenes (that I recall...I wonder if Winters does only 2 per book). But they were good and thorough. And I love the slight awkwardness of two men who both normally top.

What didn't work
If you're looking for an action-packed story, look elsewhere. The plot is mundane (I felt in a good way). Very little happens, but this is supposed to be a realistic story, so I didn't feel like much had to happen.
Posted by Unknown at 11:57