Where Nerves End (A Tucker Springs novel) by L.A. Witt 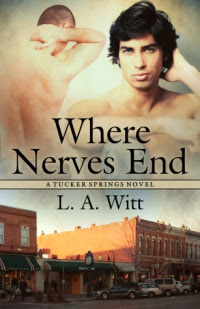 Length: 61,000 words, 180 pages
Blurb
Jason Davis can handle a breakup. And an overwhelming mortgage. And a struggling business. And the excruciating pain that keeps him up at night thanks to a shoulder injury. Handling all of it at once? Not so much. When his shoulder finally pushes him to a breaking point, he takes a friend’s advice and gives acupuncture a try.

Michael Whitman is a single dad struggling to make ends meet. When a mutual friend refers a patient, and that patient suggests a roommate arrangement to alleviate their respective financial strains, Michael jumps at the opportunity.

Living together would be easy if Jason wasn’t so damned attracted to Michael. Good thing Michael’s straight, or the temptation might just be too much.

Overall
Sweet, cute story that isn't incredibly fresh, but holds up on its own. Another lovely Tucker Springs tale.

Review
Oddly enough, this was the first Tucker Springs story to come out, so of course it was the last one I read (not including any future releases)! Part of that was just circumstance, so when I had birthday money to burn on books, I remedied that problem.

I could very much associate with Jason and his pain, and his struggle to find something that would relieve the agony, along with the sleeplessness that can join that pain. (And I'll be honest, the story has caught my interest regarding acupuncture.)

While I liked Michael and Jason together, I struggled with the mid- to late-sections of the book. The conflict, while reasonable, didn't feel believable to me. I had trouble really relating to Michael's dilemma, although I realize it's a very real challenge. In real life, something minor--no matter imaginary or not--can stop us from going after what we want. So it wasn't that it wasn't something that needed to be overcome, I just felt he was making a bigger deal about the whole thing than was necessary.

But, along that same vein, the resolution and falling action all fit well with the story, the characters, and the conflict. So I guess I'm a little mixed on the whole thing. It's all perfectly reasonable and realistic, but it also made me want to smack Michael upside the head.

If anyone was scared off by the presence of child in the story, this one is fairly safe. He's 7 years old and only with Michael half the time, so he's barely on screen for those who prefer their romances child free. And toward the end, he has some rather cute scenes with his family.

In general, I found the story enjoyable, but it didn't wow me. Aside from some disagreements with Michael, I don't have anything bad to say about this tale. Definitely worth a read, especially for fans of Tucker Springs, who--if you're anything like me--want to collect them all! (And on that note: These probably work best read in order, but for the most part, it's not necessary. The only points given away is you know who ends up with whom, which is usually obvious anyway in this genre.)
Posted by Unknown at 18:18