Dance With Me by Heidi Cullinan 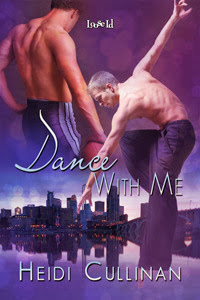 Dance With Me by Heidi Cullinan
Stars: 4.5/5

Length: 240 pages
Blurb
Ed Maurer has bounced back, more or less, from the neck injury that permanently benched his semi-pro football career, but every time he turns around, dance instructor Laurie Parker is in his way. But when a bargain lands him as an assistant in Laurie’s ballroom dancing class, everything changes.

As Laurie and Ed lose themselves in dance, their lives continue to spin around them: Ed’s injury makes it clear he’s nowhere near recovery, Laurie feels the pressure by friends and family to perform once more, and the community center that has become such an important part of both their worlds threatens to close. Alone, they haven’t had the strength or spirit to face what life has hurled at them. But as the turns of their personal paths lead them time and again to one another, Ed and Laurie begin to think that if they dance this dance together, they might be able to succeed.

Overall
A slow-building story that took two men who had to overcome their past--and their present--and gave them the strength to have each other. It was a lovely, sweet story that hit home for me.

Review
First off, I would recommend this book to anyone who is going or has gone through rehabilitation for a life-changing injury (as long as it's still not raw in your heart) and for anyone who knows one of these people. Ed's struggle and epiphany are hard to swallow, but read incredibly true.

Being that I'm still in some rehabilitation for an injury, sometimes it was difficult to read what Ed was going through, but there were lines that clawed especially deep. For those who need someone else to understand what it's like--even if it's just reading about that person--or those who need help understanding what it's like because of someone in their life: read this story.

Some of my noted quotes:

"It was like all the fear got buried in some weird subbasement inside him when things were good, because until the pain hit, he honestly thought he was okay."

"[His pain] wasn't a punishment. It wasn't a gift. It just was. His pain was his life. It wasn't all his life was, not always."

"But what I am done with is waiting for when things are better. I'm done waiting for the pain to be all gone. I'm done trying to keep it at bay."


That aside, this has an incredibly sweet couple who verbally spar in the beginning, but eventually come to understand each other. The turn from advasary into friends was nice, and the subtle blossoming of friendship into something more was even better. Yes, that tale has been told before, but this book doesn't focus on that change, but allows it to happen in the background.

We also get to see both men with weaknesses and opportunities to overcome those weaknesses, as well as the need to rely on their partner for strength. It was a perfect balance in the relationship, which lended to the believability of the relationship.

However, it also meant the story took time to develop each character's struggle, strength, and failure or victory. That, of course, means some parts seem to drag, just a little, as the reader waits for the next surprise. It also made for a longer telling, which wasn't bad, but it was a surprise.

The various cast of characters added good flavor to the two men, creating drama, but never being unrealistic, either. They were, in general, all good people, but they weren't cardboard cutouts. They could be mean (intentionally or not), they could be selfish, and they could be helpful in the way that kids just don't want their parent to be helpful. In other words, they were wonderfully human. I always appreciate when even the 'bad guy' gets the depth that most every human has.

So overall, a pretty perfect story that didn't get 5 stars because of the slow bits that were too noticeable to let slide.
Posted by Unknown at 21:19