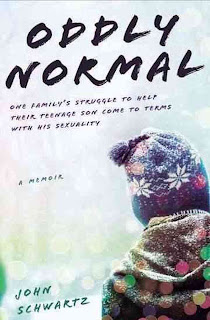 Length: 304 pages
Blurb
A heartfelt memoir by the father of a gay teen, and an eye-opening story for families who hope to bring up well-adjusted gay adults.

Three years ago, John Schwartz, a national correspondent at The New York Times, got the call that every parent hopes never to receive: his thirteen-year-old son, Joe, was in the hospital following a failed suicide attempt. After mustering the courage to come out to his classmates, Joe’s disclosure — delivered in a tirade about homophobic attitudes—was greeted with dismay and confusion by his fellow students. Hours later, he took an overdose of pills.

Additionally, John and his wife, Jeanne, found that their son’s school was unable to address Joe’s special needs. Angry and frustrated, they initiated their own search for services and groups that could help Joe understand that he wasn’t alone. Oddly Normal is Schwartz’s very personal attempt to address his family’s own struggles within a culture that is changing fast, but not fast enough to help gay kids like Joe.

Schwartz follows Joseph through childhood to the present day, interweaving his narrative with common questions, including: Are effeminate boys and tomboy girls necessarily gay? Is there a relationship between being gay and suicide or mental illness? Should a child be pushed into coming out? Parents, teachers, and counselors alike will welcome Oddly Normal and its crucial lessons about helping gay kids –and any kid who is different -- learn how to cope in a potentially hostile world.

Overall
In a touching, educational, and surprisingly thought-provoking memoir, John Schwartz tells the story of his son--and of other LGBT youths. The focus is Joseph’s unique journey, but the author also uses his tale as a reflection of what LGBT youths, and teens in general, face. The topics include sexuality and the social atmosphere, as well as the ramifications of coming out and the statistics on gay teens (and the strength of that evidence). But Joseph’s struggles also touch upon mental health, ranging from teachers tossing diagnoses at children to the use of powerful medications on growing bodies.

Review
The tale opens with Joseph’s suicide attempt, then backtracks to the beginning—Joe’s birth. We are given a slow progression through his life, with contemplation about early signs of his sexuality and his progression through the stages of childhood. Between chapters exploring his son’s life, John provides information, sometimes on sexuality, sometimes on mental health. While he provides a wide variety of statistics, he also evaluates the quality of the data and studies that have confirmed or refuted what are often considered well-known facts.

As Joseph’s unique personality begins to be expressed, other traits begin to appear as well. While they don’t show up at home, troubling behaviors begin to occur at school, ranging from confronting authority, biting the back of his hand, and difficulties socializing. These behaviors—which vary and fluctuate year to year depending on how the teacher handles Joe—lead to conflicts with the school system, a series of therapists and counselors, and a flood of diagnoses.

While sexuality does play a key role in Joseph’s story, and in his mental health, it is the mental and behavioral health issues that become the focus. The Schwartzes are hesitant to place young Joseph on medication, especially when different therapists and psychiatrists can’t agree on a diagnosis, and so, for a large portion of the tale, Joseph faces his problems with the help of mental health professionals, both in and out of school.

The debate on whether children should be given powerful medications for their mental and behavioral health conditions is analyzed, but in some part doesn’t affect Joe until the pressure at school from his announced sexuaity build up and he attempts suicide at age 13. This thrusts him into a more intense evaluation of his problems and pinpoints one major motivating factor as depression.

Once he’s on medication for his depression (and again, there is a discussion on what medications are appropriate for children) and has resumed therapy, Joseph improves. His new out status also enables him to join the LGBT community and see that he is not as alone as he previous felt. The memoir ends with him still in high school, but it leaves him in a hopeful, happy place.

Oddly Normal is a memoir, not a self-help book, but John recognizes that the story he shares can be used to help other parents facing similar struggles. However, he is quick to point out that every child and every family will go through different experiences and overcome different obstacles. He is not trying to tell parents how to handle their child, but merely showing what he and his wife did, how it worked out, and the information he gathered along the way.
Posted by Unknown at 13:10