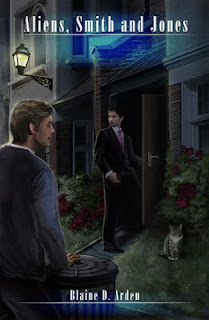 Length: 75,000 (200 pages)
Blurb
Connor Smith works for Primrose, an organization tasked with monitoring and tracking aliens and alien technology. It's a job that doesn't know the meaning of "nine-to-five". It also doesn't leave much room for a social life, a complication that Connor hasn't minded, until now. At the prodding of his best friend, Connor reluctantly puts himself back in the dating pool, even though it means lying about his remarkable life.

Elsewhere, Noah Jones has led a remarkable life of his own. Stranded on Earth in 1648, Noah was forced to transform himself permanently into human form to survive. He soon learned that in doing so, he'd become effectively immortal, aging only at a glacial pace. Alone, with no way to contact his people or return home, Noah becomes a silent observer of human civilization—always in the world, but never of the world. Then, hundreds of years later, he sees a face in a crowd and instantly feels a connection that he thought he'd never feel again. But he's too late: Connor's already taken.

Destiny is not without a sense of humor, though, and the two men are pulled inexorably closer, snared by the same web of dangers and conspiracies. Worse, Primrose is now aware of Noah, and they aren't ones to leave an alien unrestrained. So while Connor struggles to understand the strange pull he feels toward Noah, forces without as well as within are working against them to keep them apart.

Overall
An enjoyable romance/mystery with a bit of sci-fi thrown in. Some fun and interesting characters, some twists I wasn’t expecting, but some of the mystery in the mystery plot was not too mysterious.

Review
Noah and Connor are good leading men. They are decent guys who aren't perfect, they have a good chemistry (alien biology aside!), and you want them to have a happy ending. They are also surrounded by various other types of characters, which keeps interactions fresh and lets Arden show different reactions to different situations and really build them as people.

Despite some issues I have with weaknesses (under the spoiler mark), I enjoyed the plot and the unfolding. Arden has created an interesting world here. It was fun to hang out in and see, and while it's not deeply developed, the reader can fill in the gaps. It's like a fun romance from X-Files. The beginning stuff when they still had silly alien stories.

Received this book for review.
Posted by Unknown at 20:17