A Knitter in His Natural Habitat (Knitting, #4) by Amy Lane 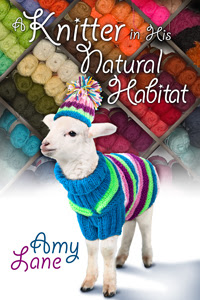 A Knitter in His Natural Habitat (Knitting, #4) by Amy Lane
Stars: 5/5

Length: 212 pages
Blurb
Stanley’s life took a left turn at a knitting shop and hit a dead end. The closest thing he’s had to a relationship breaks things off to date a “nice boy,” and none of the pretty young things in Boulder’s limited gay scene do it for Stanley. He needs to reevaluate whether working as a floor designer for a series of craft stores is really where he wants to be.

Then Stanley does a peculiar thing: he starts to live the life he fell into. Stitch by stitch, he knits his life into something meaningful. Just when he does, Johnny, the store’s new delivery boy, walks in.

Johnny is like no one Stanley has ever met: he doesn’t believe in quickies in the bathroom and has a soft spot for theater and opera. There has to be a catch. When Johnny’s dark past comes back to haunt them, Stanley realizes how much he loves his cushy life in the yarn store—but he’ll give it all up to keep the man who makes his ordinary life extraordinary.

Overall
As much as I love Amy Lane's stuff, I had low expectations for this one. Stanley is portrayed as bit of a slut in previous stories, and Johnny's dramatic dark past seemed eye roll worthy. I expected cheesy and shallow with characters I didn't like.

I love being wrong. Stanley is a bit of a slut, but he sort of reforms, and the drama that happens is dark enough to be meaningful and not just drama to further the romance. In fact, the romance is fairly secure by the time the drama happens. And Johnny is a completely sweet gentleman.

Absolutely worth picking up, especially if you like sweet, heart-stopping stories.

Review
This is just charming. Stanley and his makeshift family are charming, Johnny charms the pants off Stanley, and of course, life is knitting. While I think everyone can enjoy Stanley's story (and Jeremy's and Craw's), I think fiber workers (knitters, etc) probably enjoy it a little more—at least I do. It's inspiring. And sweet, and cuddly and some days just plain squee-worthy.

The characters in this Knitting book are kind, helpful, and pleasant to be around. While they may have habits that annoy you, they are still people you'd want to be your friends. They're nice and want to be good to you. They think you deserve something great. It makes the entire story a joy to read, although some may find it not conflicted enough. Honestly, the characters are a little too good to feel realistic, but they don't feel unrealistic either. (I know, that didn’t make sense!)

I was surprised where the plot went and how things turned out. It was a wondrous shock to see how things unfolded. In many ways this is the darkest of the Knitting series, although the purity of the characters never makes it feel too desperate. Even when horrible things are happening, there is still a sense of hope that radiates in the actions and the writing.

Final perk: The entire cast from previous books reappear and play significant roles. We see more of Jeremy and Aiden, we get to see Ariadne have her baby, and more Craw and Ben—plus the Ben-Stanley conversation from Stanley's view, which is very different from how Craw interpreted it. A warm, fuzzy family of knitters who help Stanley and Johnny come together.
Posted by Unknown at 19:28