The Hot Floor by Josephine Myles 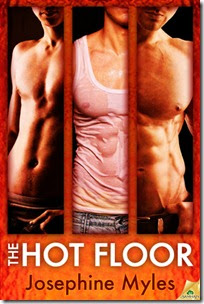 Dumped by his boyfriend and reduced to living in a grotty bedsit, Josh Carpenter has gotten used to expecting the worst. Now he lives only for his job as a glassblower…and occasional glimpses of his sexy downstairs neighbors, Rai Nakamura and Evan Truman.

Every time he overhears the diminutive academic and the hunky plumber having loud and obviously kinky sex, Josh is overwhelmed with lust…and a longing for a fraction of what they have.

To his amazement, Rai and Evan find his embarrassing tendency to blush utterly charming, and the three men grow closer over the course of the long, hot summer. Despite Rai’s charming flirtation and Evan’s smoldering gaze, Josh is determined never to break his new friends’ loving bonds.

On the night a naked Josh falls—quite literally—into the middle of one of Rai and Evan’s marathon sex sessions, the force of their mutual attraction takes control. But just as Josh dares to hope, he senses a change. Leaving him to wonder if the winds of love are about to blow his way at last…or if history is about to repeat itself.

Followers of my reviews know that sex in stories is usually my least favorite part. This is an exception to the rule. A perfect mix of hot, steamy sex, a slow build of romance and drama, and a terrified narrator, who I associated with perhaps a bit too much. A perfect mix for a steamy romance that is just as delicious as the cover.

Review
Considering the smoking-hot cover and the steamy sex scenes later, the beginning of the book starts slow as the characters meet and become friends. It worked, and it helped lay the foundation that cemented their relationship.

The first-person narrator is a bit of a spazz and jumpy. I connected with him immediately. He worries about his job when he has no need, he can't imagine people wanting him, and he has a string of crap luck (or good luck, maybe), to get things to where they go. Despite his poor self-image, he's not overly dramatic about it, although his kicked-puppy personality is the motivation for most of his actions.

I think what worked best for this story (aside from the yummy sex scenes) was the fact that the characters didn't seem like they went together at all, but Myles made it work for just that reason. The three men are all so different, but in that way they complement one another and break up stereotypes (mostly). Even beyond the main three men, there is a great cast of everyday folk who are just like coworkers, neighbors, and flirty friends that you've probably met in real life.