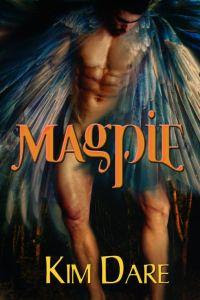 Length: 215 pages
Blurb
Everet has found his perfect place in the nest. As a raven, he’s ideally suited to his new role in the nest’s security flock. Some of the jobs it entails have been far more enjoyable than others, but when he’s called to retrieve a magpie, whose got himself into trouble in a local human club, it becomes a truly life changing experience.

Magpie shifters have always been looked down on by other avians. Just as attracted to shiny things in their human bodies as they are in their avian forms, everyone knows they’ll do anything for money—and they’re not above stealing what they can’t get by more honest means.

Kane knows what being a magpie means, and he’s got the bruises to show for it. When Everet rescues him from his latest scrape, Kane knows better than to believe the raven will actually take an interest in him and his welfare, but it’s just possible that Everet is different to any other man Kane has ever met.

Overall
After reading Duck, I was anxiously awaiting Everet's story, and while it wasn't at all what I expected, it didn't let me down in the least. Everet and Kane are so different from Raynard and Ori, that it's a nice change in both personality and in the dom/sub dynamic. I wasn't as blown away or as emotionally invested in the characters, but I found the evolution of them and their relationship to be highly enjoyable. (And the writing felt stronger, since it didn’t rely as heavily on referring to them as ‘the submissive’/’the dominant.’)

Review
Kane is a brat, but with his drug-use history, it's not really too surprising, since much of his brattiness comes from his addiction (although, not all of it). He's well matched with Everet, who needs someone to boss around, but who also wants someone with a backbone to challenge him. Their personalities lead to conflict, but ultimately also lead to balance in a rough and tumble sort of way.

Hamilton continues to be a jerk, but I love how we get moments of Ori putting him in his place. That has to rub him the wrong way. *cackles madly* My only issue with Hamilton's later actions is that it felt someone forced in order to cause X, Y, and Z to happen, but it also didn't bother me as much, because I can see Hamilton doing what he did, although the motivation behind it was a tad flimsy. It would be interesting, if there are going to be more in the series, to see how Hamilton could be redeemed as a character. But if there are going to be more, I think the next is going to be Albatross or Doctor-bird. :)

The plot focuses on the transformation of Kane from a druggie whore to a happy submissive. The concept isn't necessarily highly original, but I enjoyed the progression nonetheless, and it provided plenty of opportunities for Dare to develop the world and the nest, which was a complaint I had in the first book, plus it showed the improvements that have happened since Ori came into power (as it were).