Men of Smithfield: Mark and Tony by LB Gregg 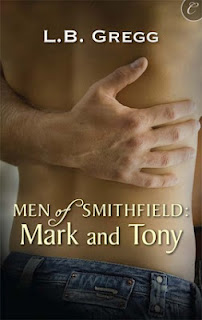 Men of Smithfield: Mark and Tony by LB Gregg
Stars: 3/5

Length: 36,000 words
Blurb
Coming home from work to find my boyfriend banging our hairy, married landlord--in our bed--was bad enough. Discovering Jamie had also cleaned out my bank accounts made it officially the worst day of my life. I think I can be forgiven for wanting revenge, even if a few little laws (and possibly Jamie's nose) got bent in the process.

Fortunately, the law is on my side in the form of my oldest friend, Tony Gervase. I've tried to deny my attraction to the sexy trooper for years. After all, he made it clear long ago that he wasn't interested in me that way. But if the hot encounter in his kitchen is any indication, he is now. At least the day is ending a whole lot better than it began...

But the morning after, the Jamie situation goes from bad to seriously messed up. The jerk's in more trouble than I could have imagined. And as it turns out, I don't know Tony as well as I thought I did either...

Overall
Sadly, this is one of those stories that didn’t impress me, but I can definitely see why other people would enjoy it. I think my main problem is that I had trouble relating to the main character, which, when written in the first person as this was, makes a story difficult to get into. This piece mingles a touch of mystery with a heavy touch of erotica and a general sweep of romantic plot.

Review
Everything starts with a bang as Mark breaks up with his boyfriend in a dramatic, fists-flying way. I was immediately sucked in, and despite the dramatics, I stayed interested for most of the whirlwind plot. While not a murder mystery, it does have a puzzle that Mark needs to solve (even if he should leave it to the police), which plays an underlying motivation throughout. It was enough to keep my interest and keep the story moving.

I really liked Tony, the law-abiding, sensible one. Although we aren't given a huge amount of development, I liked most of what I saw. There are some questionable decisions/actions he takes, but overall they aren't major. That one thing I didn't like was pretty big and felt somewhat out of character, but I was willing to forgive it just about as easily as Mark did.

Speaking of Mark... He kind of annoyed me. While his initial reaction to the incident involving his (ex)boyfriend seemed reasonable, he continues to make poor decisions throughout the story and denies that they are bad ideas, even with Tony chanting as much in his ear. He suffers from hot and cold syndrome, and while he's not a terrible character, I had trouble relating to him and seeing his side of the story, which also made it difficult to see why Tony was interested in him at all. However, the glimpses we see of Mark acting like a reasonable adult made me wonder if he was acting this way because of the circumstances, or he was just made to react that way in order to further the plot. I'll never know.

I loved the scenes involving Mark with Tony or with his family, as it (tended) to show a better, more reasonable Mark. The love between his family members is very sweet and honest and feels real, making a crappy situation into an almost-tender moment. Also, the steel door bit was practically laugh out loud funny.

Requested this book for review.
Posted by Unknown at 20:13