The Tea Demon by Cornelia Grey 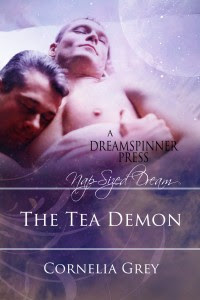 Length: 52 pages
Blurb
Thief Eric Devon wishes one thing: for people to leave him bloody well alone. And maybe for more whiskey. Until a mysterious stranger offers him a job so dangerous that no one has ever attempted it and survived to tell the tale: recover a priceless object from the Turtle Merchants’ impregnable palace. Intrigued by the man and the challenge, Eric accepts—but the stranger is none other than the legendary airship captain known as the Tea Demon, terror of the Sea of Clouds. Eric must come up with the best plan in history if he wants to complete his job... and survive it too.

Overall
The way this story was written reminds me of The Princess Bride (the movie), as it is a mostly serious tale told in a mostly serious manner that pokes at the cliches because it can. A thief and a pirate airship captain get into a bar brawl with classic choreography, share a kiss, and meet the humorous crew. This story is fun without being too silly, although some may find the tropes a little too much. I thought everything was well handled; a refreshing taste of something different.

Strengths
While this story didn't have laugh out loud humor in it for me, it was still amusing and had me chuckling. Eric is a fun, laid-back guy who is willing to roll with the punches. He's also witty, sharp, and likes seeing Captain Tea flustered (but really, who doesn't?). The character dynamic is light and fun, creating a well-rounded jocular story.

Grey made the steampunk background come to life with beautiful, succinct descriptions of the world and the characters. In a few pages she creates a world, building upon the reader's basic knowledge to expand it into a fantastical environment. Although we are just given the bare bones, it's enough to provide a full-color illustration and support the simple--and amusing--plot.

The characters are plenty of fun, varying from a grumpy dwarf and an underage stick of a girl who fills the role of mechanic to the suave thief and the temper-prone captain. While they may fill standard roles, Grey has fun with the characters, letting the trope show through and plays off of it.

Weaknesses
While everything felt fresh and great, some points were deducted for originality. (It may be unfair, as the author seemed to be striving toward that point exactly, but it sometimes struck as a little too cheesy for me.) Otherwise this was a fun little story.

Received this book for review.
Posted by Unknown at 18:00