"Thigh to Thigh" by Angelia Sparrow and Naomi Brooks 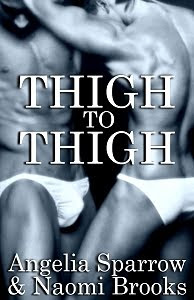 "Thigh to Thigh" by Angelia Sparrow and Naomi Brooks
Stars: 3/5

After reading "Paying Forfeits" by the same pair and dealing with the same men, I wasn't looking forward to "Thigh to Thigh." But I already owned it and I hoped that some of my problems with the first story would be resolved in the second. I was pleased to see my faith rewarded.

The writing seemed to have improved, but it could be because instead of showing snapshots from different weekends, the reader was given one short but continuous story, creating a solid idea of characters and emotions. While the writing didn't blow me away, it did improve enough that I'd consider reading another story by one or both of these authors.

All the negative emotions of the first story are fixed as we head into this story, and while the move is done with a magical hand wave, it's enough to allow the reader to enjoy this story after so much of the first was unbearable. I feel like these two stories combined make a novel with all the bits in the middle missing. We have the awkward beginning that causes the rise in conflict and the happy ending with a hot, sensual sex scene. No idea what happened in between, but I'm glad I read this story! Very tasty.

Note: The way I rated this story may have been influenced by my negative feelings toward the previous story.
Posted by Unknown at 20:46

If you would like a better sample of what Naomi and I can do with a plot, may I suggest Curse of the Pharaoh's Manicurists or Shell-Shocked?

Thank you for the suggestions and taking the time to leave a comment!