Crush - Michael J. Saul directs this contemplative anthology of short films about same-sex relationships between men that explores the multidimensional definitions of love and the often-painful realities of romance. Stories involve a longtime couple grappling with the morality of military service, a pair of teens thrown into passion, an unrequited teenage crush and an art student tackling new lessons with a difficult teacher.

(Rent) Four short films grouped together, all touching upon different topics while being centered around two men. It's sometimes difficult in a world where we constantly see high-budget films, because when we see something made on a lower budget, we nit pick at all the tiny things. Overall it was a relatively enjoying collection, though some were stronger than others. "Bloodlines" was the weakest, both in terms of plot and dialogue, while "Strokes" was the best in overall construction (though I think I missed something along the way). "Don't Ask" and "Breathe" were both good, and "Breathe" definitely leaves a lot in the air but is a pleasant way to end the group. While there was nothing amazing in the video, I wouldn't mind sitting through it again. 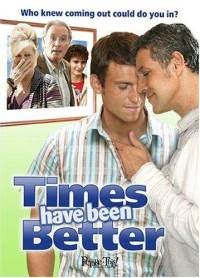 Times Have Been Better - After moving in with his beau, 30ish banker Jérémy decides to let the cat out of the bag, telling his unsuspecting parents, Guy and Rosine, that he's gay. Though they've always envisioned themselves as enlightened, the news staggers Guy and Rosine -- who are determined to get to the root of Jérémy's homosexuality. Olivier Guéritée also stars in this delicious French farce.

(Buy/Rent) This is an amusing little flick that looks at relationships and expectations. Jeremy is expected to be the good son who is succeeding in business, and his parents are just waiting for him to find a girl to settle down with. When he announces he's gay and living with someone, his parents are shocked. They both react very different as they try to--or not to--cope with the news. I really did enjoy this movie on an intellectual level if not just as a viewing pleasure. It didn't seem to do anything wrong, but it just didn't grab me. I do appreciate the recognition of stereotype and the breaking away from stereotype. This is a good film for a study at human relationships and being honest about yourself. A comedy, it covers plenty of serious topics. 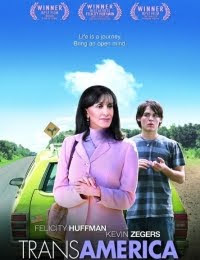 TransAmerica - Bree (Felicity Huffman) gets the shock of her life a week before her final sex change surgery when she discovers a son she didn't know she had. After bailing him out of jail, the two set out on a cross-country journey riddled with road bumps. Huffman won numerous awards (and an Oscar nomination) for her role as a man longing to be a woman. Elizabeth Pena, Burt Young, Kevin Zegers and Graham Greene co-star.

(Rent/Buy) This was a very well-done movie. The beginning started a little slow for me, and I didn't really relate to the characters, but as the two leads started opening up to each other, I found them opening up to me too. This is a movie about journeys--the journey from man to woman, from boy to man, from individual to family, from unaccepting to slightly more accepting. While it was a highly enjoyable movie, I didn't love it enough to want to buy it, but that is just my personal preference; some may want to watch this again and again. 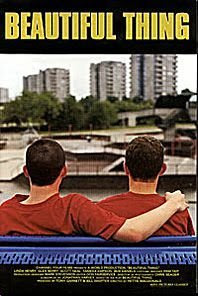 (rent) A touching story with some interesting and un-Hollywood characters, I was interested in the characters, but never really invested in them. The acting and plot were both pretty good, I just don't think the characters were ones that I could relate to, even though I felt pity and varying other emotions for them, I never became absorbed in their world. This could just be me, as if it were a book I probably would have enjoyed it more. 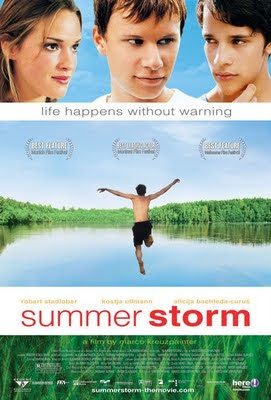 Summer Storm - A young man begins to realize he has more than friendly feelings for his best pal in this coming-of-age tale. As champion rowers Tobi (Robert Stadlober) and Achim (Kostja Ullmann) prepare for a big tournament, Tobi grows increasingly jealous of Achim's devotion to his girlfriend. Tobi avoids the amorous advances of a girl, and when a hunky, pride-filled gay crew team enters the meet, his sexual confusion thunders like an approaching summer storm.

(rent) While not a happy movie, it isn't unhappy either. It has what can be called a happy ending, although it left the romantic in me a little unsatisfied. It was a bit jarring that all the music was in English while the film was subtitled, something I hadn't been expecting. I think what rings true about this movie is the behavior of the characters, who all act pretty much like their age group would, both in their immaturity and their moments of raw emotion. The characters are not suave or cool, although many of them struggle to be, but teens just trying to fit in and find love, or at least acceptance. Definitely worth a watch. 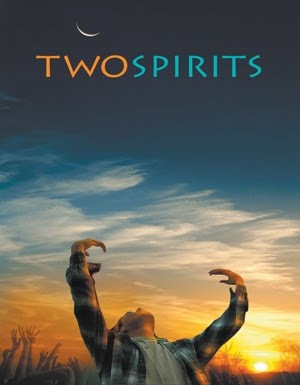 Two Spirits (documentary) - At age 16, transgender American Indian Fred Martinez became one of the youngest hate crime victims in modern history when he was beaten to death by a man who later bragged about the brutal crime. This documentary tells Martinez's story. In the process, it illuminates the Navajo two-spirit tradition -- which honors individuals who embody both the masculine and the feminine -- and demonstrates how ancient values can inform (and improve) modern life.

(rent/buy) This was a very well-done film that was professionally handled. It started a little rough, since it throws the viewer into the "story" a little, but they started explaining everything soon enough. It was very educational and, while not what could be called entertaining, it certainly wasn't boring either. It starts by talking about Fred, then goes into the history and current practices of the Two Spirited individuals, then switches back to Fred. While I understand the need for this, it did lend a sense of disjointedness to the film, overall.
Posted by Unknown at 14:07