One True Thing by Piper Vaughn and MJ O'Shea 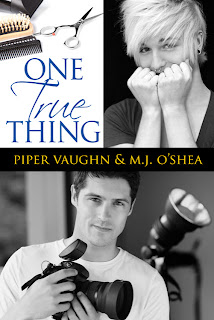 One True Thing by Piper Vaughn and MJ O'Shea
Stars: 3.5/5

Length: 260 pages
Blurb
Dustin Davis spent years wishing for a prince but kissing frog after slimy frog. When he sees Archer Kyriakides for the first time, Dusty thinks his luck has finally changed. Archer could be it. The One. But their hot and cold romance leaves Dusty confused: why does it feel right one moment and wrong the next? It doesn’t make sense—until the day Dusty meets Archer’s identical twin, Asher, and realizes he’s been seeing them both.

Asher Kyriakides dreams of being a fashion photographer, but he’s stuck with a job he hates and an irresponsible playboy brother whose habits drive him absolutely insane, especially when he finds out Archer is dating the cute little blond Asher can’t seem to forget. Torn between loyalty and desire, Asher does nothing but try to warn Dusty away.

But when Archer finally goes too far, Dusty turns to Asher for comfort, and Asher knows he can’t refuse. It isn’t long before they realize they’re falling fast, but more than one thing stands in their way, not the least of which is Archer, who isn’t quite ready to stop being a thorn in his brother’s side.

Overall
While I enjoyed this novel, I also was very blasé about it. The writing felt stiff compared to One Small Thing and while the plot was interesting, I had a hard time getting into the characters and siding with them. Don't get me wrong, I liked the characters, but also struggled to really care about them.

This is worth a read, but I found it disappointing after how much I enjoyed the previous story.

Review
Dusty and Asher are a cute couple; both men are looking for true love, and they feel the classic zing when they meet. They definitely fall into the love at first site trope, but it's pretty well-handled and a majority of the story doesn't focus on that so much as the twin confusion and the later troubles involving Archer. I still found it a bit irksome, but not enough to put down the book and not continue.

The broader cast in this book is enjoyable, and the roles they play in the story (minor though most of them are). I'm also hoping we'll get a Lane/Josh book, because things were definitely set up for that to happen. The additional cast added some nice flavor to the story and let characters talk out their problems with outside sources, but I also felt like most of the extra characters were just cardboard cutouts. They lacked much depth, although I still found them darling.

I really wanted to smack Asher (after taking a hit at Archer) for how he handled his brother and the entire fiasco that he causes. I found the whole thing super annoying, but I can also respect that people react differently to situations. In the end, I found the end resolution very fitting and kind of amusing.

Everything gets tied up rather neatly in the end, but that doesn't mean there isn't a little bit of heartache. I was glad the ending had a bit of melancholy because that balanced out the love at first sight perfection from the beginning of the novel.

This won't be for everyone, but I think fans of the authors and the standard contemporary romance will enjoy.
Posted by Unknown at 18:19