Dex in Blue by Amy Lane 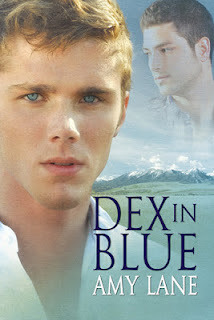 Except nothing is simple—not sex, not love, and not the goofy kid with the big dick and bigger heart who moves his life into Dex’s guest room. When they start negotiating fractured pasts and broken friends, Dex wonders if Kane’s honest nature can untangle the sadness that stalled his once-promising future. With Kane by his side, Dex just might be able to reclaim the boy he once was—and if he can do that, he can give Kane the home and the family he deserves.

Overall
After Chase in Shadow, the next of the Johnnies series is far less intense! Dex in Blue is not nearly as angst ridden, nor does it have as much of a rising action/climax/falling action construct. It focuses more on the development of these two men, especially Dex, in their own lives and in their relationship. This is a much slower book than many other of the genre, and aside from some drama at the end, it keeps it's steady pace throughout. That didn't stop me from reading it all in one day though, and I think most people will enjoy the characters, story, and writing enough to forgive the somewhat drawn out telling.

Review
After my first read through, I was of the mind that I enjoyed this novel, but felt that it covered too much and could have ended earlier. However, on the second read, perhaps because I was prepared for the length, I felt the story worked. The problems both characters have are faced and dealt with, and while I still have some issues (in a spoiler note below), I enjoyed it more.

Kane and Dex are sweet together as they just sort of stumble into bed and then build a life together without defining it as having a relationship. Kane’s insistence that he isn’t gay seems a little questionable, but somewhat understandable, and the conflict and resolution this builds is worth any of the eyebrow raising it may create.

While I read this all in one night, I wouldn’t recommend it for most readers. The gradual and slow build of the plot is better experienced when it’s not rushed into one sitting, and although I felt an urge to know what was going to happen, this is one of those novels that is better savored. I think hurrying through leaves a feeling of disappointment, since the drama is minimal and it really is the journey that is worth experiencing.

I'm looking forward to the next book in the Johnnies series, which hopefully will focus on Ethan!

Spoiler!
*
*
*
*
*
The end felt a little too perfect. Everything ties up too neatly, too perfectly. Also, since most readers will be familiar with Chase in Shadow, they'll notice some repeated themes. The ending isn't bad, and it definitely is sweet, but the almost absolute perfection of it all working out felt like too much to me. I could have been left with more hope and fewer definites.
Posted by Unknown at 18:08