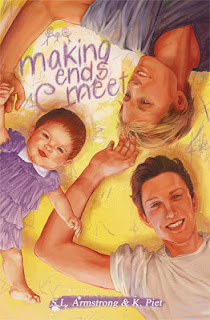 Length: 65,000 words (166 pages)
Blurb
Zach is just seventeen years old, but despite his youth, he has more than his fair share of responsibility. An experimental fling in high school has led him down the path of single fatherhood. Now, he holds down a job, takes his college classes online, and pays his own bills as best he can—all while juggling daycare and chores and play-dates for his four-month-old, Mae. It's a rough, 24/7 life, but to Zach, Mae is worth every penny spent and every minute of his day.

With no free time to speak of, it feels like a miracle when Zach meets Wil in the check-out line at his work. Handsome, grounded, from the proverbial "right side of the tracks", and—even better—good with kids, Wil is everything he could want in a boyfriend. But as interested as Wil is in Zach, he has his own life, his own family, his own job and college career to think about. All the various draws on their time means that it's hard just to find chances to be together. But Zach's no stranger to hard tasks, and believes he owes it to himself to try.

Overall
If you're expecting a plot twist, huge drama, or dark secrets, you're going to be disappointed with Making Ends Meet.

The story is as described in the blurb. It's a charming tale of a very young man who decides to keep the baby he and his friend produced after a misguided night of exploration. Zach is overly independent and Wil is too good to be true, but they still have a sweet story to share. For lovers of everyday romance (and who love babies in stories), this will probably hit all those soft squishy spots.

Review
I found this novel difficult to review because it's just so mellow. There are a few dramatic moments, mostly due to Zach's insistence that he be independent, and there is some family drama, but it's never too explosive, and most of it is just plain ol' Family Drama. In some ways this is refreshing and nice, in other ways it feels like it's missing something. Much like Zach, I was waiting for the other shoe to drop.

Wil is a perfect boyfriend, a perfect father, and a good guy. I found him almost too good, as he's rarely, if ever, the cause of strife in the relationship. Obviously he's the older, wiser, more experienced one, but his perfection rubbed me the wrong way. He rarely gets angry and he does nothing wrong aside from spoil Mae and Zach. I would have liked to have seen some faults in him, but from a literary angle, his only fault was his lack of faults!

Zach is the opposite. He is inexperienced and young and is struggling to raise Mae on his own. He's all about being independent and is against taking money from people, even his parents and his boyfriend. I can completely understand his stance, his struggle, and the arguments he has with friends and family, but I also think it's good that he learns to accept help when he needs it.

The familial contrasts (money, love) are a persistent theme in the story, and I felt the end came together to show what is important. However, in regards to the end, I also wished Zach wasn't always wrong. I felt he had some good points, even if they were only emotional, and they needed to be addressed and accepted more than they were, especially in regards to Wil spending so much money on him and Mae. Wil isn't seen in the wrong because he's giving them something, but the story brushes aside Zach's feelings about this, and despite Wil kind of knowing how Zach feels about the money being spent, he continues to do it. While he obviously has the best intentions, I thought this fault of Wil's could be explored and a better balance found.

An enjoyable story, worth reading, but only if you're in the mood for something super mellow.

Received this book for review.
Posted by Unknown at 18:23