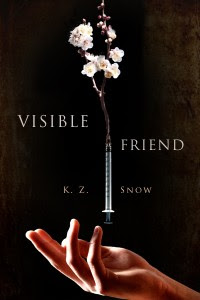 Length: 160 pages
Blurb
Christopher Borgasian has spent the last seven months painstakingly breaking up with a lover he's adored for three years: heroin. Now he's trying to make it on his own--without the drugs, without the family that rejected him for being gay, and, seemingly, without a friend in the world. The night before Chris leaves a sober-living facility to pursue his uncertain future, a stranger named Denny shows up in his room. From then on, Denny returns whenever Chris needs him the most, always vanishing as mysteriously as he appears. Chris desperately needs emotional and physical intimacy, but who is Denny, really? And can Chris believe in him when it also means believing in unconditional love?

This story was rating a strong 3.5, but the epilogue and cover bumped it up to a 4. It's a curious story that focuses on the struggle to regain a footing in life after going through rehab for addiction. In addition to facing all the normal struggles of being a gay ex-addict, Chris also has an imaginary friend who is very, very real. And attractive.

While I didn't really sink into this story and get absorbed by it, it was a good strong story that entertains an interesting notion.

Strengths
Interesting story and angle. The story doesn't involve anything spiritual, per se, but there is a certain level of other-worldliness as Denny is a not-so imaginary friend whose physicality is becoming harder and harder to ignore. However, even by the end, by which point the secrets have been revealed, there is still an element of mystery about Denny's origins. This half-explained reason behind Denny's presence is enough to satisfy the reader's curiosity without locking the author into one reality or truth of greater being. A basic, sweet story with a fresh idea.

Characters you feel empathetic for. Even if the characters didn't get under my skin, I still cared about them and was sympathetic to them. Chris, who is struggling to get his life back on track, and Denny, who is struggling to...well, pretty much the same thing. Denny may not have an addiction in his past, but he's coping with reality just as much as Chris is. Both more are selfish and selfless, struggling to do the best thing, even if they're unsure what that is. Honest, good characters.

Weaknesses
The only weaknesses is that the story didn't grab me and hold me captive. It was interesting, well paced, and well told, but it never got into my head or my heart. Parts also fit a little too nicely together, but in some ways this is fitting for the story, considering Denny's entire involvement.
Posted by Unknown at 14:11