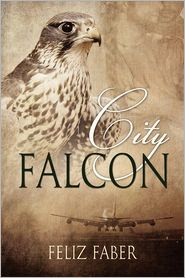 What on earth is a live falcon doing in the middle of JFK airport? The answer to this question brings PAPD officer Mark Bowman face to face with falconer Hunter Devereaux, right in the middle of a fascinating field experiment using falcons to keep runways free of nuisance birds. The falcons are intriguing, but it’s arrogant, out-and-proud Hunter himself who really rubs Mark the right kind of wrong. Too bad Mark can’t act on the attraction: he’s deeply in the closet, and since he wants to keep his job, that’s where he's determined to stay.

However, every time their paths cross, Hunter gets a little deeper under Mark’s skin, until Mark can’t deny his feelings any longer. Giving in to his desire makes Mark happier than he can remember being, but Hunter isn't willing to hide their relationship forever. If they’re going to make a life together work, something has to give. Someday soon Mark will have to choose, or life will make the choice for him before he’s ready for it.

Overall
I picked up this book because falcons, falconry, and falconers all interest me. (I have plans for Desert Falcon, but was hesitant because it's a Bittersweet Dream.) In that regard, I was not disappointed in the least. From my knowledge, Faber did an excellent job correctly portraying the art of falconry (although I'd been told the oils from the hand can damage the oils on a falcon's feathers, so contact shouldn't be made, but that may be depending on who you talk to). I liked the falconry, the characters, and the general environment that Faber created. (Also, 1994...that's going to be a historical novel soon!)

Even though I liked this book, it won't be for everyone. It's not fast moving, and while there are moments of intense emotions, it's not a wild ride in that regard either. There are some wonderful paralleled construction between the falconry project and sexuality, and the men act like classic 1990s' men, which was fitting (and not over the top). Mark is, overall, a good guy, but he has some issues, specifically with having to deal with his sexuality in that time in America, which leads him to blow up over minor things. His struggle with his sexuality in that time period (and his unwillingness to come out) is the focus of the story, and I think it was handled well with the climax, the confrontation, and the falling action.

Strengths
While I didn't realize it until after I'd finished, there is some well-worked parallel story telling between the acceptance of falconry at the airport to handle the gull problem, and the acceptance of homosexuality by society. It's not a perfect match, but there is definitely the struggle to get something "strange" accepted by people who "don't really understand" the point.

I liked the characters because they all felt very real to me. No one was perfect, but they weren't bad people either. Even the antagonists of the story were just ignorant or close-minded, not really evil or vindictive. Most of the mess is made by Mark because of his--substantiated--fear of what would happen if he would come out, although his partner Sean is also a source of conflict as the main force of negativity toward gays in the story, which reinforces Mark's need to keep hidden and some of his behaviors toward Hunter.

The falconry was well explained, and handled in such a way that it didn't dump information and overwhelm/bore the reader, nor did it have an expectation of knowledge, aside from minor words that the reader can easily get from context. Though, I must admit I do have an interest in falconry, so I may have a slight bias.

Weaknesses
This is not a high-intensity book, it's not action packed or overly emotional. Although the characters, their interaction, and their emotions are important, they aren't overwhelming either. This wasn't a story that grabbed me and held on. However, if you're looking for a low-key, mellow read that is rather educational and feels real, then this may be a good pick.

One other minor niggle is that the end seems to happen extremely quickly and then stop. While I can understand the author's choice not to continue any further, I felt something less abrupt would have been appreciated.

Requested this book for review.
Posted by Unknown at 18:13