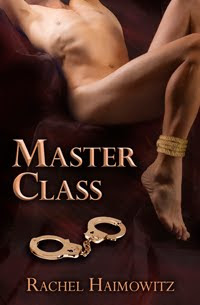 Length: 16,700 words
Blurb
Broadway darling Nicky Avery is a shooting star by night, but by day he bounces from one heartless one-night stand to the next. A quick flogging, a rough lay, a new whip-hand to manipulate—yet still he yearns for something he cannot even name.

He finds his first true hint of satisfaction in Devon Turner, a self-possessed film star and expert Dom. Devon knows what he wants the moment he sees it, and what he wants is Nicky Avery. Nicky’s never learned to trust and has a nasty habit of topping from the bottom, but he learns fast that in the bedroom, Devon won’t tolerate his actor’s masks.

Nicky's a broken boy, but Devon knows exactly how to put his new sub back together. With patience, care, and all the punishments his little pain slut can handle, Devon breaks Nicky down one scene at a time, revealing a mind that yearns to trust and a heart that hungers for the ecstasy of true submission.

Overall
Everything I read with Nicky and Devon makes me want more! Although Nicky plays harder than I'm often comfortable with (even in my fiction), Haimowitz' approach, especially once the reader gets through the initial rough scenes, makes the bond between Devon and Nicky overwhelm any discomfort I have with the beginning.

The first two scenes involve some heavy play, although readers who are familiar with SUBlime will know what they are getting into. For those who haven't read the previous book, I recommend reading Master Class first as it does a better job of showing the beginnings of their relationship, even though it still leaves me wanting more, more, more! Which is good, because then you can enter SUBlime with an appreciation of their standing.

Strengths
With material as sensitive and potentially difficult to handle, the writing becomes a crucial piece of the storytelling (not that it isn't important otherwise) and Haimowitz did an excellent job of exploring Nicky, who needs to feel a strong hand who won't be manipulated, and Devon, who enjoys controlling Nicky, but also who wants to help him. The scenes were handled extraordinarily well, balancing the sexual, the psychological, and the emotional so that by the end the reader is feeling what the characters have gone through. Sensual and breathtaking in some of its rawness.

Weaknesses
First a weakness that isn't a weakness: I want more. The ending is satisfying and gives closure, but I still want more, like a spoiled child! The nice thing is I can go back and re-read SUBlime for more Nicky and Devon adventures.

The only real weakness of this novel is that is is NOT for everyone. There is some what is described as "rape fantasy" (although it's not nearly as cruel or rape-ish as other books that have had similar warnings). I wouldn't consider it a rape fantasy, but I think the warning is good, as the first scenes involve force and humiliation and could trigger. Humiliation is a squick for me, but it's not bad enough to really push the off button for me (just to give an idea of it's level of disturbance).
Posted by Unknown at 18:25