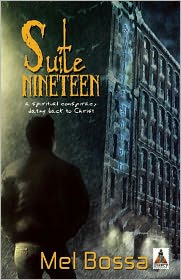 Blurb
Drawn by the promise of change, young medium Ben Lebeau, moves to the big city, into the Shilts Manor—an old textile factory turned trendy loft space. There he meets seductive Lennox Van Kemp and his clan of Métis—guardians of the oldest lie. Ben is pulled into Van Kemp's emotional circle, finally sating his most secret desires.

Against Ven Kemp's warnings, Ben befriends his neighbor Ezra Collins—a scarred man who has taken a vow of celibacy. As Ben tries to get closer to Ezra and earn his trust, he also struggles to escape Van Kemp's psychological grip on him. The harder Ben falls for Ezra, the more he suffers from hallucinations and memory losses. Soon, the Manor's walls begin to close in on him and Ben must rely on his psychic abilities to survive the assault on his mind.

As Ben and Ezra unravel Van Kemp's plans, they expose a spiritual conspiracy dating back to Christ—a conspiracy that will shake their very world and restore their Faith in humanity.

Overall
Although I think this novel would have been better off in movie form, it wasn't as bad as I was expecting from the few reviews I glanced at on GoodReads. While it wasn't fantastic, it wasn't terrible either. It was very unique and definitely was striving to try something new and different, which I have to applaud. For the most part the reader and the narrator are both completely confused and lost, which makes the first 60% of the novel difficult to sink into, but around that point everything starts to get explained and plenty of action happens.

People who like psychological thrillers may enjoy this book, as it's very heavily entrenched in the style of the reader and narrator not knowing what's going on and trying to reveal the answers. There's also plenty of fantastical elements in this grim story. It's not a book I'd recommend to most people, as the plot took a long time to develop, the writing was okay (not bad, but not enough to grab me either), and it's a very strange story. But I only struggled through one part, so it wasn't too bad. I wasn't terribly in love with the characters, and while I was interested in what was happening, it seemed to take too long to get around to it. Overall, I felt very blase about this book.

Review
I don't think I can split this review evenly into Strengths and Weaknesses, so because the novel was different, I'm going to review it differently. Warning: Due to the nature of this book, I'm going to try not to hit any spoilers, but some small things may get through.

Ben is not an ideal hero and is an unreliable narrator because we spend over half the novel questioning if he's sane or not. He's struggling to start his life over after leaving his small town, but in addition to dealing with his psychic powers, he doesn't have a job and DOES have very strange neighbors, who he hasn't really met. Initially, Ben doesn't trust some of his neighbors, as he gets a very bad vibe from them, but later gives only the barest of resistence before falling into bed with them. His erratic behavior doesn't help the reader decide if he's sane or not, and even if he is sane, it leads us to question some other things about him and his decision to associate with people that he doesn't trust. I had a difficult time buying it, although some of it is explained by Ben's strained psyche and his confusion. I feel like the story was supposed to come across as him being manipulated, but it came across more that he was just being kind of stupid.

Not to say he wasn't being manipulated, because obviously large chunks of the story depend (rightly) on people lying to him constantly. Some parts of the manipulation were well done, it was just the initial switch from "bad vibe" to "hey, she's hot" that felt off to me. Speaking of which, Ben is bisexual, so floats between male and female lovers, although no sex is described on screen.

One of the most difficult elements of this book to get around is the mass confusion that the reader experiences through Ben. Because Ben can't tell what's real/true, neither can the reader, making for a very long beginning as the reader is dragged through events while Ben (often) makes poor decisions. Of course, the second half of the book goes a long way to explaining the first half, although it also raised some more questions, for me at least.

Having said all of that, this story does take the reader on quite the ride, from absolute confusion to mostly understanding which transforms into an action-y story. The characters are dark and are not people you'd typically want to become friends with, not even our lead narrator who is, overall, a good guy.

The worst part of the novel is when things start to be explained. The problem is that it gets explained all at once in an info dump like no other, where the reader finds out all sorts of supernatural stuff that was minimally hinted at before. Not only is all the information thrown at the reader at once, but it makes the first half of the story and the second half of the story feel like two different beasts. While I can see the need for the confusion in the beginning and the explanation, I didn't feel like they were well handled. A different approach to reach the same ending probably would have made this a very enjoyable story instead of a mediocre read.

There were creative elements of this novel that I really enjoyed, and some world building that I felt, if approached in a differently would have created a dark and interesting world. The struggle for sanity and reality was interesting, as was the fight for the self. However, the story didn't feel realized, and while I finished it, and enjoyed it for the most part, I can see most readers giving up on what is a difficult book to get through with varying levels of reward.

Requested this book for review.
Posted by Unknown at 20:56