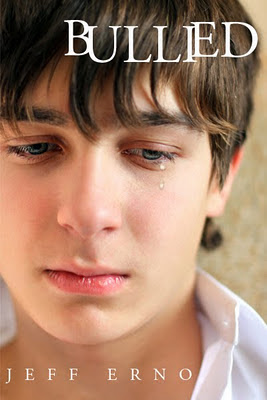 Length: 158 pages
Blurb
Every day, all over the country, teenagers struggle with the realities of bullying. Tormented, ridiculed, and beaten—simply for being who they are—these teens face alienation, humiliation, and even the explicit assertion that they have somehow brought this upon themselves, that they should just blend in. Bullied is a series of short stories exploring the world of these teens from several different viewpoints: the victim, the bully, the gay bystander, the straight friend, the concerned parent.

Closeted Bryan wonders why Christian Michaelson doesn't just try to blend in if he hates being bullied so much. Star athlete David isn't a homophobe—after all, he's not afraid of anything. Jonathan, a Christian fundamentalist, must weigh the Bible against peer pressure and what he knows is right when he discovers his childhood friend is gay. Bully victim Chase Devereaux finds an unexpected ally in a brave fellow student. A single mom struggles to accept the reality that her only son is gay. Two tough gay teens are forced to confront their own inner demons when tragedy befalls a classmate they failed to help. And overweight Kirby finds the strength of character to make a friend, which leads to a lifestyle change and a chance at love. Each character grows as an individual as he or she comes to terms with what it means to be a gay teenager in America.

Overall
Let me start of with a warning: This book is written with a purpose, an agenda, and a message to get across. If you didn't know about all that from the name of the book or the blurb, then the Letter from the White House and the Introduction would give it away. If you somehow started reading without getting this point, then the amount of anti-bullying might surprise you, but really you have no one to blame but yourself.

Aside from the obvious agenda and one story, which seemed weaker than the others, I have nothing but praise for this book. It's heartfelt, saddening, and hopeful. It made me want to make a difference in the world, or at least my part of it. It made me want to support my friends instead of teasing and mocking, which comes so easily. True, its messages read like an after-school special (but with better characters, plot, dialogue, and acting), but it's not trying to hide that. I'd recommend this to most everyone, but especially saps. Saps will love this. I should know.

Blending In
A sweet story about a closeted gay student who watches horrible bullying happen to a flamboyant gay student and learns how important it is to stand up against bullying. Short, meaningful, and beautifully done. It was touching.

Chuckie
This story feels unique because it takes the point of view of the bully and not the victim. It gives a good look into the head of the bully and what drives him, and also the potential for change. While the transformation happened quickly (obviously working within a limited space), it was well handled and believable.

Saved
While this story was heavily religious, I liked that it didn't use religious beliefs as the catalyst for the bullying. Instead, people were the cause, whether they came from an uber religious background or not. Another touching story of overcoming bigoted beliefs and of standing up for a person--and for yourself.

Different
While all stories of bullying are sad, this one was truly heartbreaking in its brutal honesty. It touches upon herd/peer dynamics and the fear of being "associated" with the outsider, no matter what that outsider is. The hardest part is almost everyone will know there was a time when they didn't stand up for someone who needed it.

Invisible
A touching story of a kid who is coping with being bullied--until it escalates to public humiliation. As he tries to "man up" and "tough it out," he really just wants to be left alone and stay invisible. To live his life. The character is so real--so like any other kid--that it makes his story all the more moving. The show of his strength and the necessity of an outside force to help him, is extremely telling of everyone.

Shame
Taken from the perspective of a mother, I didn't find this story as emotionally moving, but older readers--and readers with children--may be able to better relate. It was well done, even if you want to smack the mother around (which is the point).

Kirby
Poor Kirby. Fat and gay. But this story is nice because it really makes something other than sexuality the central focus of the bullying, although it's still important. Obviously obesity (which is a childhood epidemic now, according to experts) is a major issue, both for health and psychological reasons. While I encourage people to get fit, I think this story points out the important differences in getting fit because it's expected of you and getting fit because you want to. Being pressured into getting skinny isn't going to work, in most cases. It has to be something the person really wants.

Requested this book for review.
Posted by Unknown at 18:09