Crying for the Moon by Sarah Madison 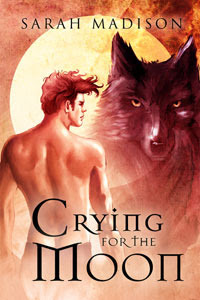 Crying for the Moon by Sarah Madison
Stars: 5/5

Length: 210 pages
Blurb
Vampire Alexei Novik may have the teeth and the coffin, but he’s given up the lifestyle for an old fixer-upper in the Blue Ridge Mountains. Weary of his past, Alex plans to keep to himself, but it seems his sexy, new neighbor, Tate, can’t take the hint—a good thing, since it turns out he’s handy for all kinds of things around the house. Tate even gets along with Alex’s werewolf friends, though one of them pointedly reminds Alex that their friendship is a bad idea.

If a platonic relationship is a bad idea, the growing attraction between Tate and Alex is a disaster waiting to happen. Loving Tate will draw him into Alex’s dangerous world, and Alex is torn between having the relationship he’s always craved and keeping Tate safe. Tate won’t take no for an answer, however, and seems to handle everything Alex can throw at him without blinking. Just when he thinks things might turn out all right after all, Alex’s past catches up with him—forcing him to make a terrible choice.

Overall
This novel utilizes all the qualities that make vampire novels great--but also has fun with it. The characters are hilarious, caring, and loyal; the sex is hot; and the plot is well fleshed out. Even though most of the action doesn't happen until the last 20%, the story never drags as each chapter develops characters and cultural history. For those who are familiar with vampire and werewolf lore, you'll appreciate the nods of recognition to some of the standards, while also finding a few new twists.

Strengths
Set in the modern world, there is very little development that needs to be done on that end, but Madison took vampire and werewolf lore and tweaked it just enough to make it her own. The info wasn't dumped on the reader all at once, except for a single instance and that wasn't even dumped, but worked into dialogue. The nuances in the cultures and the world creation felt believable and well done, but most of all, it took something that has been rehashed and made it feel fresh.

This story contains a very limited cast (no more than 10 people total), but the main six are constantly on screen and moving around. The skill with which the characters are handled is excellent, and their unique personalities all shine through. Each is an individual that adds a different dynamic to what's happening in the story, sometimes to Alex's chagrin. Fun, oddly human, characters.

While initially there doesn't seem to be much plot, everything is building toward the final climatic scene with purpose. The hints and allusions are invoked to lure the reader into wanting to know more, without being obtuse and ignoring facts or questions that the characters in the story would know or ask. In addition, while main climax is slowly being built, other tiny events happen, some of which are dramatic (an attack) and some of which are just people living in close quarters and newly falling in love. The varied events and happenings create a well-paced piece.

Weaknesses
If I were pinpoint one weakness, it's definitely that the end happens quickly and a few points are brought up without being resolved, possibly for future sequels, or possibly because life doesn't always give us all the answers. However, I didn't feel shorted by the end or the information given either, I just want to know More! More! More!, which I count as a good thing, even though I put it under weakness.

Requested this book for review.
Posted by Unknown at 17:57

I just wanted to say that I came across this review after a particularly crummy day at work. Thank you! You really left me smiling here--I'm so pleased that you enjoyed this book! :-)

Well now I am so glad I have put this book on my gotta have buy list. I haven't read your work yet, and now I really do! Hope you have an even better week...*S*