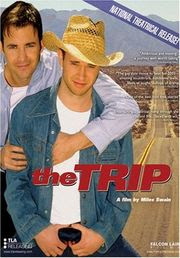 The Trip - It's 1973, and gay rights activist Tommy Ballenger (Steve Braun) is about to embark on the journey of a lifetime when he meets an older man, Alan (Larry Sullivan), whose political views skew as far right as Tommy's do left. In spite of their differences, they fall in love, but four years later they're torn apart when an anti-gay book Alan once wrote re-surfaces. Does their love deserve a second chance?

(rent/buy) I shouldn't be surprised when a movie turns out good, but after reading the description, I figured it would be cheesy fun, not cheesy fun that was something more. This is one of those films that some people are going to take more out of it than I did, sort of like TransAmerica (maybe road trip themes don't do it for me). The acting was good, all through the ages, and there were some well placed real clips to set the mood of the political history. While this definitely amused me in some parts and touched my heart in others, I never felt deeply moved by the characters. 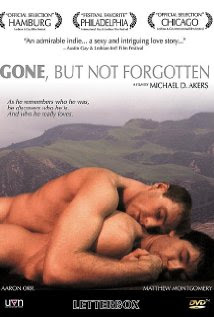 Gone, But Not Forgotten - In writer-director Michael D. Akers's romantic drama, forest ranger Drew (Aaron Orr) meets yuppie Mark (Matthew Montgomery) after he falls while rock climbing. Mark wakes up in the hospital with amnesia and sees that Drew has remained by his side since the accident. Drew offers to move in with Mark to help him out until he regains his memory, which propels the two men into a passionate affair. But things change as Mark's memory slowly returns.

(meh) Everything in this movie was mediocre enough that I spent the time re-reading a book while it played in the background. Why bother? I wanted to give it a chance, even though it started off rough. It has the classic signs of a small budget film with less than savvy tech hands and actors: When the camera wasn't stationed, it wobbled and dramatic close-ups felt over used, especially in the beginning. Whether it was the acting or the script--I don't know--but everything felt slightly forced and, honestly, uninspired. The story line had potential and was actually somewhat interesting, but the stilted acting/dialogue/performance left me uninterested. When the leading men finally got together in the end, I was happy because the movie was over. Why by no means torture to sit through, it probably would have been in if wasn't multitasking. 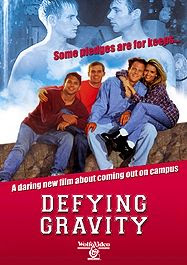 Defying Gravity - Frat boy Griff (Daniel Chilson), who works hard to keep his brothers in the dark about his intimate encounters with Pete (Don Handfield), is forced to come to terms with his sexual identity in this touching drama. Pete, who left the frat house for a more liberating off-campus life, wants a real relationship, while Griff claims he only wants sex. But when gay-bashing thugs beat Pete into a coma, Griff must face his true feelings for him.

(rent) This was okay, although it definitely felt like a movie from the '80s (though it's from the '90s). This isn't the first time I've encountered "boy dealing with sexuality while boy he likes is unconscious," and to be honest, the other time (the book The God Box by Alex Sanchez) did it better, probably because the acting was so stiff in this movie. I had a hard time believing there were feelings between the lead males, and while I liked how Griff's best friend, and some of the frat, reacts to Griff and Pete when it inevitably is revealed, little else really stuck out to me. While this movie wasn't bad, it definitely rang with elements of amateur, especially in the acting. 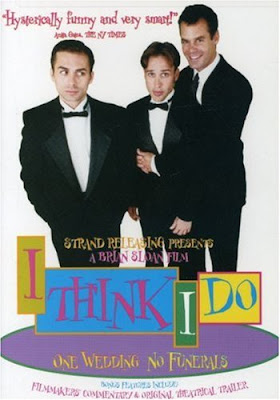 I Think I Do - The marriage of mutual friends reunites former college roommates Bob (Alexis Arquette) and Brendan (Christian Maelen), who tried to ignore the sexual tension that always flowed between them. Brendan finally comes out to Bob at the reception, but is it a case of too little, too late? Writer-director Brian Sloan's romantic comedy co-stars Lauren Vélez and Jamie Harrold and features a rare cameo from Marni Nixon.

(rent) The start of this movie is a little slow as the relationship between the two men is built, creating their friendship and the sexual tension there. After the big fall out, there is a time skip in which everyone went their separate ways. Oddly enough, even though they live in different states, the group is still the core of best friends (possibly the biggest, "Wait, really?" moment in the movie, aside from the ones purposefully placed there). I felt like the plot was strong, the dialogue was pretty good, but the acting was lacking. The plot is serious, but with obvious humorous tones, both in characters (like the soap opera actor) and events (face mask before the wedding). However, the actors didn't seem to be able to handle this double play, as they played everything as straight drama, leaving a feeling that they were trying a little too hard. That aside, it was still a pretty good--if not a little strange--movie. 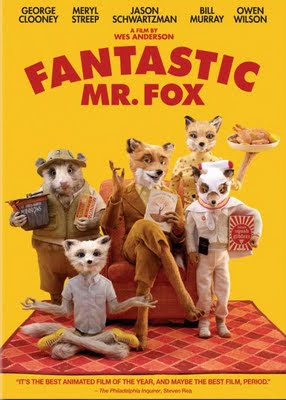 Fantastic Mr. Fox - When Mr. Fox's nightly raids on three nearby farms raise the ire of the selfish farmers, he must outwit the men's increasingly outrageous plans to catch him in this animated adaptation of the Roald Dahl book. As the farmers' schemes take a toll on his hungry family, Mr. Fox must find a new way to get his paws on the bounty. Wes Anderson directs, and George Clooney and Bill Murray lend their voice-over talents in this Oscar nominee.

(rent/buy) Going into this movie, I had very few expectations. I'd heard good things, in general, although I'd heard plenty of people complain about the animation style. I found the visuals a little strange at first too, but my love of foxes and general willingness to try new things meant I gave it a shot. The style grew on me the longer I sat through the film, although I doubt the style will ever catch on. The voice acting was good, and I really enjoyed the depth of the characters, who struggled with many things, the main issue focusing on the fight between being animals and creatures who try to be civilized. The plot was interesting, but strange, leading my interest to fade in and out slightly, although the escalating reactions of the humans is amusing. Because of the unique style of this movie, I would definitely recommend renting before purchasing if possible, but I think everyone should give this movie a chance.
Posted by Unknown at 12:21